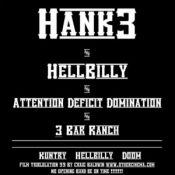 I must admit, I am a late arrival. Yes, Superjoint Ritual is one of my favorite metal projects. I didn't realize Hank 3 played bass in Superjoint Ritual. Silly me. Yes I love original country music. I've had the privilege of seeing great concerts by George Jones, Johnny Cash, Loretta Lynn etc... Obviously I love punk, metal and country (among other genres). Why wouldn't I be neck deep in Hank 3 by now? Well, all things happen for a reason and Thanksgiving Eve 2011 I witnessed all that is Hank 3 live for the first time and I am undeniably hooked. 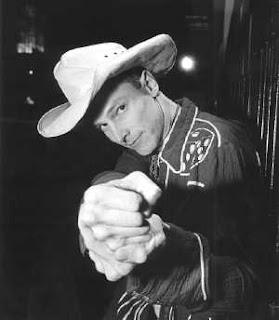 There are so many levels to enjoy Hank 3. Musically, historically, imagery, attitude, his connection with the fans, his altruism, sincerity, ability to connect to people from different backgrounds and his limitless talent. Undoubtedly, one of the coolest people on the planet. 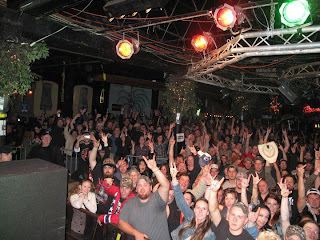 Photo Hank 3 took of the crowd at Crocodile Rock 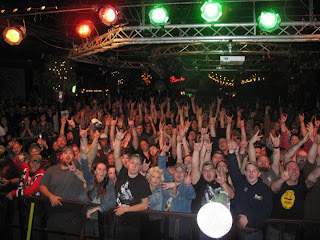 Hank 3 was on stage for 4 hours. I do not know how he physically does this. He is thin of frame, but is obviously powerful and motivated, physically and mentally. Focused and in tune with his objective. This is not one of those country sets where the crowd sits in their chairs all night. The first two hours Hank 3 performed country that ranged from tribal sounding to vintage original country and as Hellbilly, where he combines a countrified rockabilly sound that is also punk and metal in it's own way. During the music, I imagined a scene where the complete band is playing outdoors, around a huge fire in the remote darkness, the music building the surrounding tribe of misfits to hysteria, without the use of chemicals, drugs or liquor (although I am sure others had imagery that included all of those, but really, the music created this effect, no substances required). This description fits all of the styles Hank 3 incorporates. Ever hear of country that rages? Here it is. 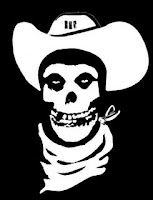 Whether you love Pantera, Butthole Surfers, Johnny Cash, Misfits, Black Flag, Stray Cats, Slayer, EyeHateGod, Rob Zombie or the Dead Kennedys, you would have an unbelievable time at a Hank 3 concert. I happen to love all of those influences and I would imagine Hank 3 does too. 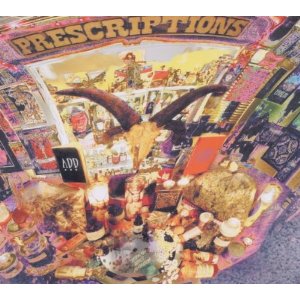 The third hour of the set included Attention Deficit Domination, a doom metal, stoner project that literally blew me away. More than half of the crowd escaped the confines of Crocodile Rock after the first two hours. I am sure the paying customers had a wonderful time and got their money worth. I personally had know idea this was going to kill the way it did. As the fiddle player, stand up bass player, guitarist and slide guitarist left the stage, Hank 3 switched from acoustic to electric guitar and the drummer remained. Videos played on the screen behind the drummer and the metal began. The grooves brought to mind the best of the stoner genre, vintage Black Sabbath, St. Vitus and got the small, but aggressive pit moving. I was glad that the crowd diminished, because the intimacy that was created, brought that ritualistic, mesmerizing feeling to a peak. I was lost in the music. ADD brought those uncontrollable smiles to my face, just as Hank 3's first two hours did. I was having the time of my life for three straight hours. 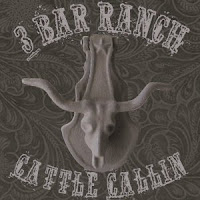 The final hour was 3 Bar Ranch, where Hank was joined by another guitarist and a different drummer who was fully capable of providing the necessary blast beats and thrash attack.  The vocals are provided by cattle auctioneers. Crazy. That is all I can say. Three hours and 45 minutes into the night, Hank 3 finally won. I was a beaten man.

One of the best concerts I have ever witnessed.