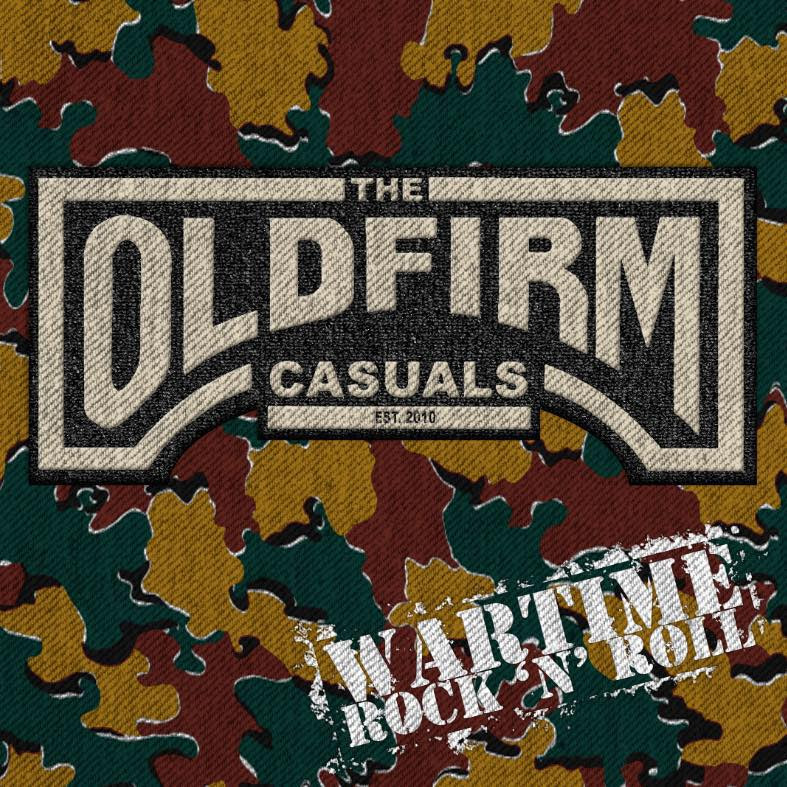 From the Rose Tattoo-like power rocker "Hell's A Lot Better" to the Electric Frankenstein-like, driving punk, face smash called "Sex Case" to the mid tempo, melodic oi of "1312" that the band is loved for... The Old Firm Casuals always have a blasted good time. Even on the decidedly slower title track, there is a snarl that radiates an empowering attitude. Give it a listen on this youtube version: 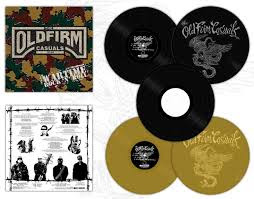 I guess I need to find this on vinyl... my addiction is kicking in!

CD/digital has a bonus rager in "Sanctuary City". The Electric Frankenstein power is undeniable!

Love this band. Love this release. Lars (and his associates) can do no wrong.

Wish I was going to Hawaii!!!! 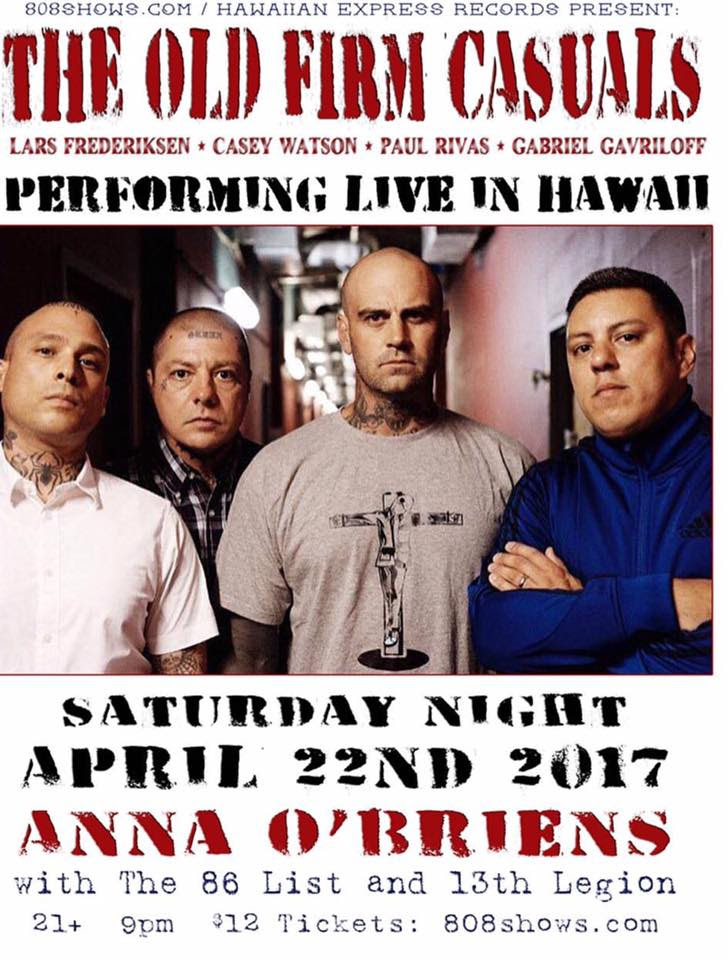 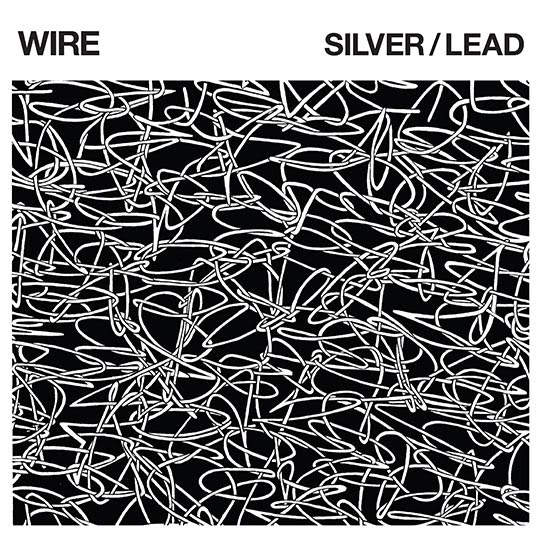 I don't know anyone, who truly loves punk, hardcore or alternative music who doesn't acknowledge that Wire's 1977 LP "Pink Flag" is a mandatory, influential and classic record.

Most then also add titles like "Chairs Missing", "154", "The Ideal Copy" and "A Bell Is A Cup" to some extent as titles you have to follow up with and or also note as classic records, depending if they ever even listened to anything beyond "Pink Flag". Basically, you can't go wrong with anything in the 1970s or 1980s.

Most of my hardcore friends were introduced to Wire in the same manner... through Minor Threat's ripping cover of "12XU". Hell, I didn't even know it was a cover until years later. Then I picked up "Pink Flag" and understood.

Seriously. If you are reading this and do not have Wire and Minor Threat's versions of "12XU", if you don't own Minor Threat's entire discography or Wire's "Pink Flag', make sure you obtain those before the end of the day, preferably on vinyl. 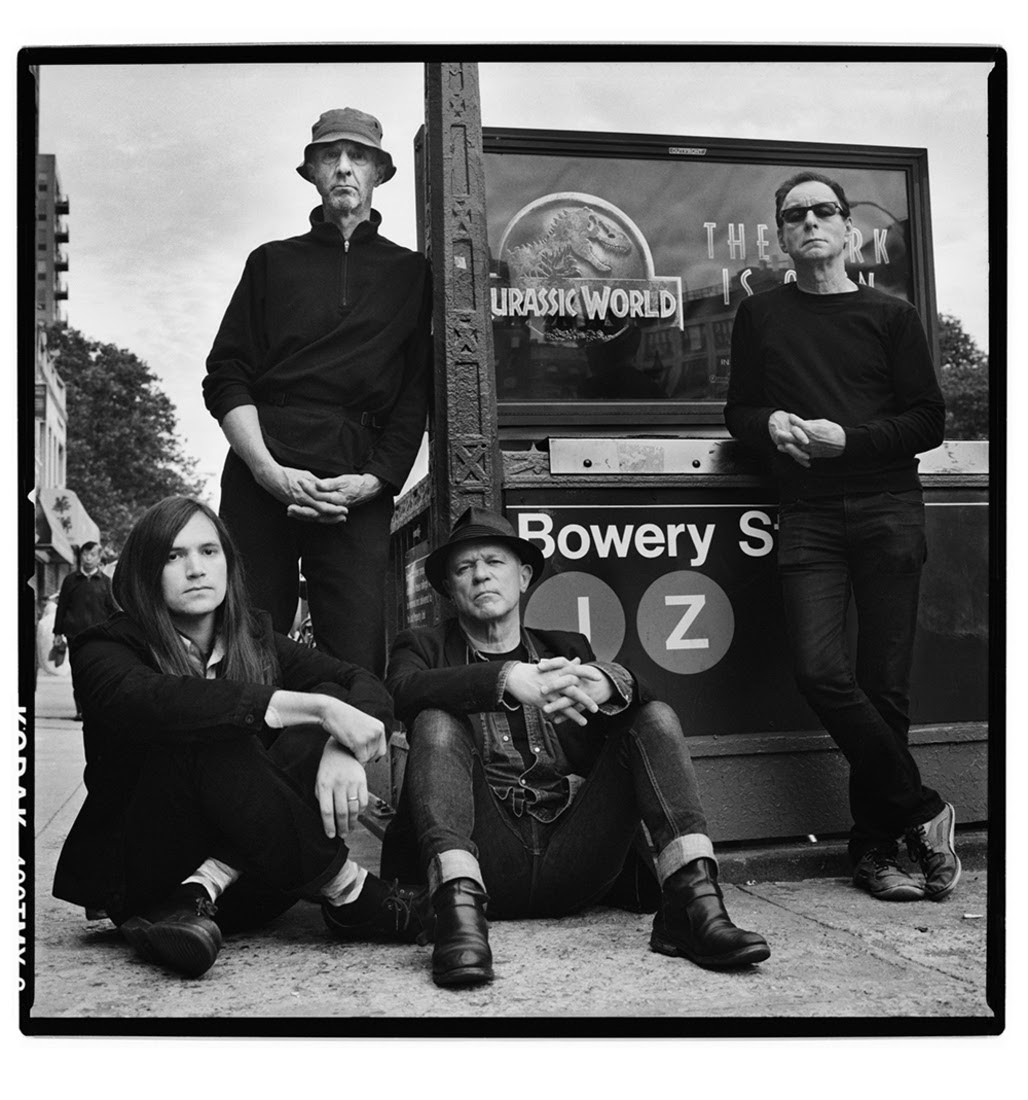 Wire in 2017 reminds me of the haunting, dark, post punk of the 1980s. I was always attracted to that sound because it felt like it was trying to be energetic and hopeful but there was an undercurrent of complete bleakness. An aural reflection on how I felt most of the time.

Give "Short Elevated Period" a listen:

SHORT ELEVATED PERIOD
Skippering a skiff, in the typhoon season
Open to change, in need of a hand
No longer confused by rhyme nor reason
Indian queens paddle dugout canoes

The passenger matches the price that he’s asking
Embracing the modern he now understands
It’s a pivotal moment, in an uncertain future
A pain relief deal done on the Frankfurt Express

Right up to the moment I I.D. you
My reasons for living were under review
A parting of the ways, what had it come to?
Standing in the road, where would I go to?

In a short elevated period

The album is varied, sometimes very heady, atmospheric and dark... begging you to put the headphones on and turn out the lights to be transported. The kind of record you want to listen to when you are just listening to a record. There are textures and sounds you don't want to gloss over and potentially miss.

The new Wire album "Silver/Lead" is available on CD, Vinyl and a Special Edition - a hard backed 80 page case bound book, with text by Graham Duff, extended credits, lyrics and lots of color photos as well as the CD.

THIS TIME
Some folks believe in magic
Does voodoohoodoo do it for you?
Some folks claim they know all the answers
And for a price they’ll share them with you


Even though I knew you were wrong!

Honorable mentions (aka if I had a lot more money and/or I expect some of these to not meet my out of pocket cost vs value analysis, but sure would be sweet to own):

DxCx is Deron Christman performing all guitars, bass,vocals and programming.

DxCx was / is in Chinga!

DxCx has also started his own blog, check out his piece on Top Ten Napalm Death Songs with Mick Harris on drums..

"Created in the mountains of Pennsylvania and affected by the lush surroundings"... DxCx is creating some enjoyable dark chaos in Penns Woods! 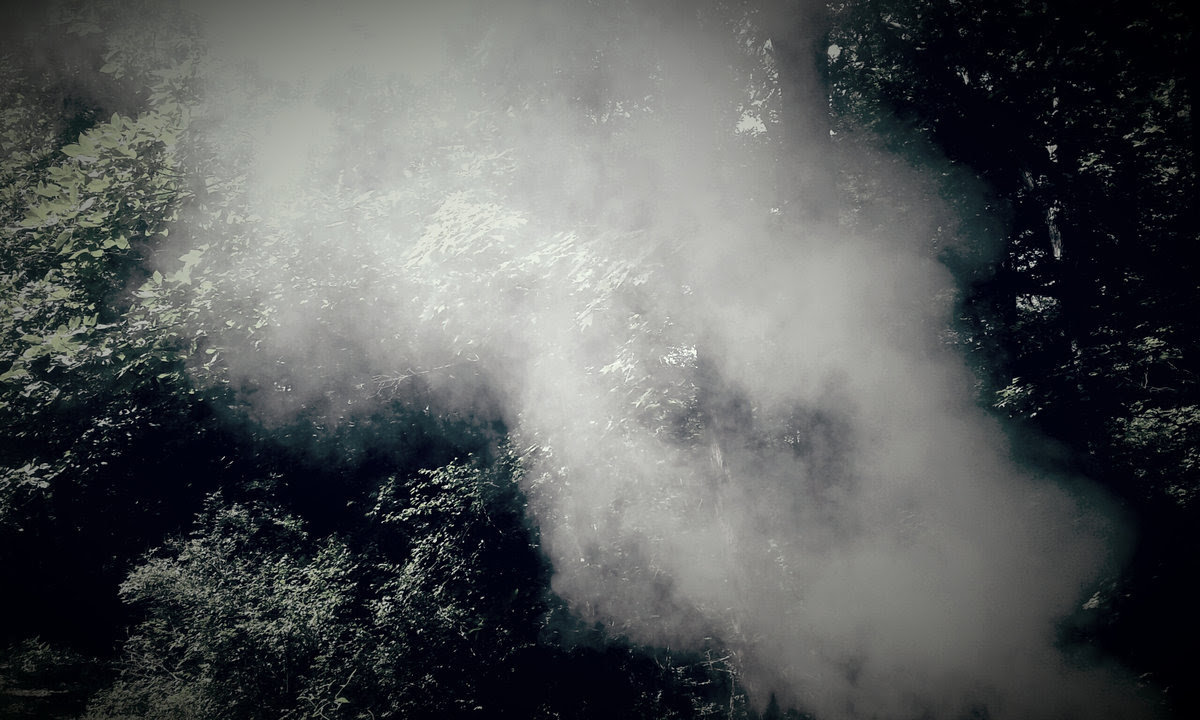 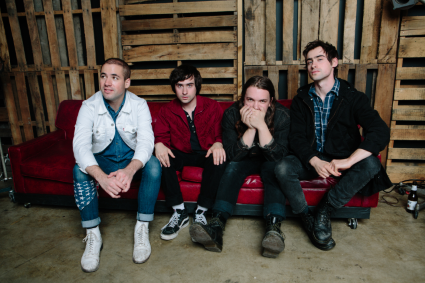 This is a new direction I want to take with my blog... In addition to reviewing and writing up music releases, I'd like to start letting you know it is time to get in on the Pre-Order.

In 2017, in order to get the cool vinyl colors, sometimes you need to pre-order.

You know, what good is it to you if I review the album near the time of the release and by then you have already missed out on the cool vinyl and other "bundles".

So here ya go. This is the first of hopefully many things I can key you in on to assist in improving your quality of life through vinyl and music...

In 2014 I advised you to get White Reaper's Ep. Write up at this link:  https://frankfoe.blogspot.com/2014/07/white-reaper-st-ep-polyvinyl.html

Check the creative video for the track "Judy French" and hear The Babys, Biters and Cheap Trick influences trickle in to their Reatards garage punk meets All melodic sound. 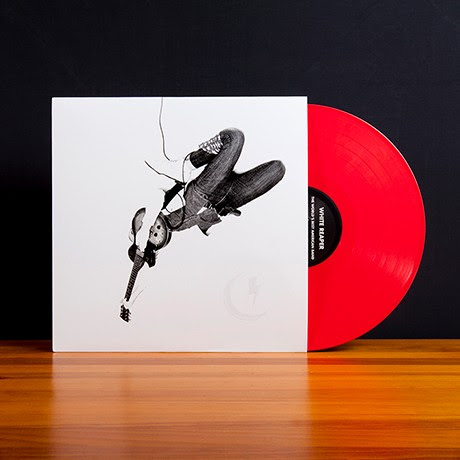 I consider myself blessed to have been alive and to be in Philly to witness Toxic Reasons and CCM at this show: 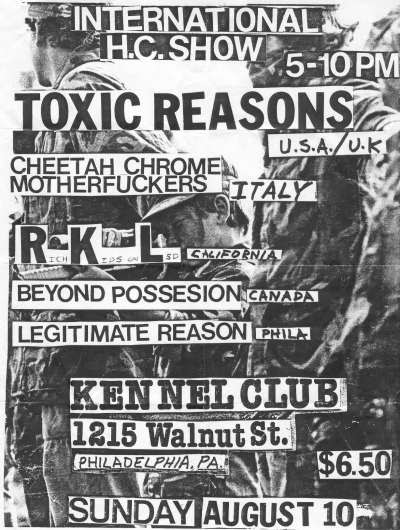 I consider myself blessed to have been able to obtain these CCM records when they were released: 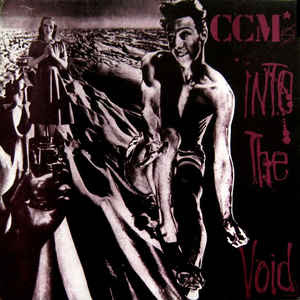 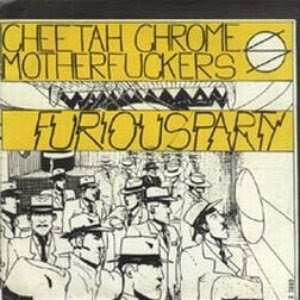 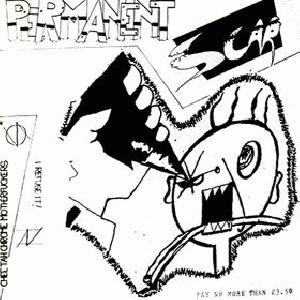 Split with I Refuse It "Permanent Scar" 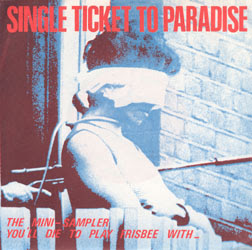 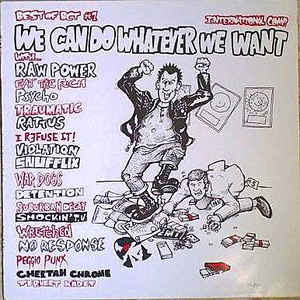 Cheetah Chrome Motherfuckers were one of the amazing Italian hardcore punk bands that blasted through the early 1980s. I think I also have some BCT (Bad Compilation Tapes) releases with them as well.

There was a time in my life when I continually listened to Concrete Sox (Your Turn Next), CCM (specifically the song "Feel Like"), Oi Polloi and Raw Power. Those worldwide hardcore bands were blowing my mind!

"The Furious Era" is available on bandcamp as a download or as a 2xLP containing all of the above material plus all the material I never had the chance to get.

So thankful this has been assembled in 2017, three and a half decades after I first heard this band.

Give "Easy Target", "Feel Like", "Foe or Friend" and "Enemy" a chance and you will need all CCM!

Vinyl and CD also available through Puke n Vomit for the US.

Ultimate Warriors "Our Gimmick Is Wrestling" 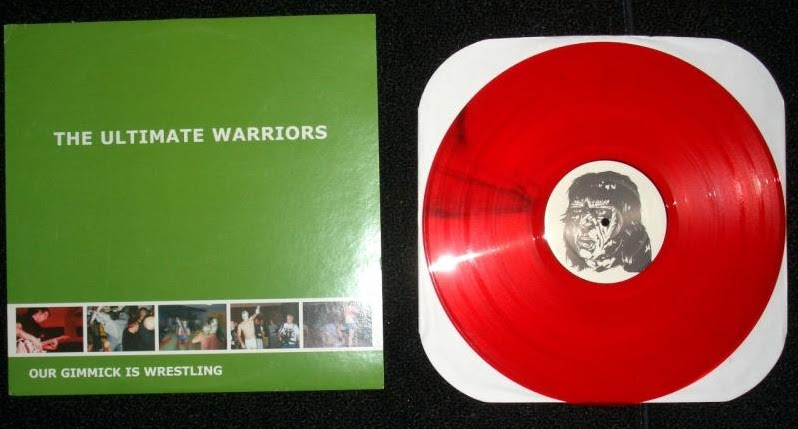 "Almost two decades ago in the small town of Nazarath Pennsylvania, like in many others, a crew of miscreant friends played loud music together. They called their band The Ultimate Warriors, creating a blistering fast punkmetalhardcore hybrid with lyrical content focusing entirely on wrestling.

They were extremely prolific, writing and recording nearly a hundred songs over roughly half a decade of making music under this moniker.

After The Ultimate Warriors ran it's course, splinter groups from most of the same members formed, including Pearls & Brass, The Gatecrashers and then Pissed Jeans. This same core group of dudes have passionately played many different genres of music together, slogging it out in the underground for years before finally earning some notoriety through Pissed Jeans and their albums released by Sub Pop.

But before all that, The Ultimate Warriors banged out breakneck grindcore, powerviolence and other mutant sub-forms of heavy music - entirely about wrestling. Their live performances devolved into a risky combination of rowdy moshing mixed with backyard wrestling antics. Injuries were common, and in a small circle of followers a reputation of danger & power grew.

This fueled The Ultimate Warriors songwriting and in the early aughts, after releasing many independent EPs, their sole longer player was recorded and appropriately titled "Our Gimmick Is Wrestling". Released on vinyl only, like all of their releases, it sold out quickly and has remained in obscurity since.

After 15 years of unavailability, "Our Gimmick Is Wrestling" is now out digitally, expanded with select recordings from The UWs vast discography. This 48-track collection spans the spectrum of metal, punk, hardcore, noise and everything inbetween. This can now be listened to across all main digital music platforms."


Oddly enough, the bandcamp page with "Our Gimmick Is Wrestling" is run by The Archivist, not to be confused with the Lehigh Valley Archivist, where a lot of the other Ultimate Warriors material can be obtained https://frankfoe.blogspot.com/p/lehigh-valley-archives.html LVA 019 contains the "Dingo Warriors" demo, "1997" demo and live at radio station WLVR (Lehigh University PA).

Between the Archivist and the Lehigh Valley Archivist you get 85 tracks of Ultimate Warrior chaos.

Cheers,
Frank FOE
Posted by Frank FOE at 4:36 AM No comments: