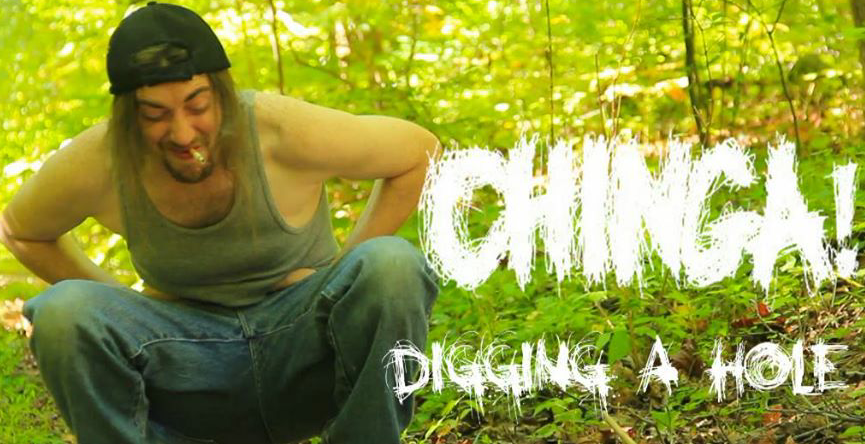 If you are familiar with Up To No Good Radio, you know I love metal in addition to hardcore and punk. Reds and Johnny tolerate my love of metal and allow me to mix in some metal ("scrappy tune of the week") to our usual assortment of punk and hardcore nasties.

Whenever I play some death, thrash or grind metal, Johnny Generic always comments that it has an impact on his bowels. Well, the Lehigh Valley PA's own Chinga! have released Johnny Generic's theme video and the bowels are moving!

The song is from their upcoming CD which hopefully will be released on Born of Chaos records as their last disc, "Relentless Culinary Assault" (http://frankfoe.blogspot.com/2012/09/chinga-relentless-culinary-assault-cd.html) was... New album is titled "SLAPPED INTO OBLIVION", due for completion before new years and release shortly thereafter!

The video for "Digging a Hole" was done by Chudward Squillace, and it is amazing both in subject matter and musically. The video stars someone with really bad teeth as well as some other REALLY bad issues.. I'll let Chinga! explain the rest:

Digging a hole: chapter 1, book 2 of the chilling, beyond belief, true life stories the blackenedgrindthrashdeathrockgroupband, Chinga! weave. This is a tale of a special man, and the family who exploit him for his paycheck as well as, his disability money. This gentle giant comes home from work to find locked doors and cabinets and must relieve himself the only way he knows.

Chinga's sophmore album SLAPPED INTO OBLIVION will be released early 2015. The band decided to unearth this song and video so the world can all...well, you can know what to do when the bathroom is locked.

Check out the video here: http://www.youtube.com/watch?v=756n75G_gfM