I listen to my words but


"The Wind" by Cat Stevens
As I step into my 50th year of existence, I can’t help but look back over the course my life has taken. They say hindsight is 20/20 and never has this been truer than at this point in time.

I remember the exact moment when I first fell in love with rock n’ roll as clearly as if it were yesterday. I was six, shortly before my seventh birthday. There was a company called KTEL and they put out compilations of all the bands that were popular at the time, selling the records with amazing TV commercials that mixed the music with live video of the bands, predating MTV by at least ten years. It was one of those commercials that changed my life. I don’t remember what the record was but I remember the band, Credence Clearwater Revival.

I was playing in the family room, and that commercial came on TV. I wasn’t really paying attention, until I heard the clip for CCR. The song was Travelin’ Band, and as John Fogerty sang, “Playing in a travel band, playing in a traveling band, Yeahhhh”, he screamed this deep guttural scream and I felt a bolt of electricity go through my body like lightening. I ran to the TV to see what it was, with one thought in my mind, “What Was That?!! I want more of that!!”

Shortly afterwards, my parents got me a Close and Play Record Player for my seventh birthday and my love affair with music and my life long musical exploration began in earnest. That was the early 70s, and I still have the first batch of records I bought with my allowance, a collection of 45s that I paid 69 cents for.

I bring this story up because it is so clear now how my path was unfolding as I look back, but growing up, going through all the passion and heartache and misery that one experiences as one learns life’s lessons, it seemed like I was forever stuck in the twists and turns not ever quite knowing where I was going. But I followed my heart and now, in 2014 I finally see how it all fits together.
Gearhead® Records was always just about following my passion. 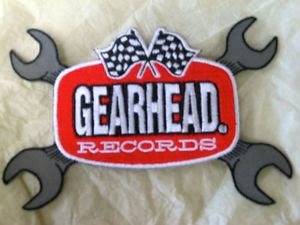 I had met Mike LaVella when we both wrote for Maximum Rock and Roll in the early 90s. We had similar tastes in music and often were the only ones digging the more garagey-rock ‘n’ roll stuff, so Tim always assigned those records to one of us to review. I was also DJing for MRR, and when Tim opened The Epicenter Record Store, we both volunteered there, so were able to spend more time talking about the bands we loved.

When Mike started Gearhead® Magazine in 1993, I was working at Reckless Records on Haight St., and he brought in that first issue to put on consignment with me at the store. Over the next few years, that was usually how our paths crossed, until I started working at Mordam Records and talked them into bringing Gearhead® in for distribution.

Shortly after that, we became partners and created Gearhead® Records and in 2000 put out our first record, a compilation CD called Runnin’ On Fumes. Gearhead® took off like a dragster jumping off the starting line, and we were off and rolling. In fact, this month is the fourteenth anniversary of that first record! Happy Birthday Gearhead Records!

When we parted ways in 2006, it was for the best. We had different visions of what Gearhead® could be, and we each needed to find our voice and follow our hearts. We split the company in two to explore our passions, ideas and interests and each did pretty good on our own.

But it turned out, Gearhead® was better together that it was as separate companies, and it is with pleasure I’m announcing that all the pieces of Gearhead® have been reunited under one roof, managed wholly by Gearhead® Productions, Inc., and guided by a board of directors. There’s a new website, Gearhead® Rocks, and from that site, you can access websites for each of the parts of the company, Gearhead® Records, Gearhead® Apparel and Gearhead® Magazine. You can also access them each individually.

There’s a bunch of new products too, the Motorskull T Shirt and Shop Rag, as well as the Wrench and Roses shirt all designed by Cuz’n Bill Lorenz from Sacramento Tattoo.

There’s also Gearhead® Pomade, crafted exclusively for Gearhead® by Cock Grease, using the XX Cock Grease formula, perfect for both rockers and greasers who need those flowing tresses to stay put whether you’re wrenching or rocking.

A new issue of Gearhead® Magazine is in the works as well, so whether you paid for an ad for issue #19 or want to take an ad out, please contact me right away.  And finally, saving the best for last, the first new record in four years, The Lords of Altamont Lords Take Altamont hits the streets April 15, 2014, just in time for the band to celebrate their fifteenth year.

Having already put out two records from this band, I knew how easy they were to work with and how professional, so when Jake called me and asked me for help with their new record, it was a no-brainer. It’s been a pretty steep learning curve though, since everything has changed since I last put out a record! But it’s been fun and well worth it, and on April 15, 2014, this baby officially hits records stores around the world. You can get your copy right now though, and until April 15, you’ll get free shipping if you live in the US. I’ll start shipping the CD on April 11, to be in your mailbox by street date, but the vinyl is gonna take longer, so it will probably ship around the end of April.

But check this out: the vinyl is a limited edition pressing of 500 copies on yellow vinyl, with a special gatefold sleeve, extensive full-color inner sleeve with liner notes, and a digital download card. The CD has 2 extra bonus tracks, but if you buy the vinyl, you’ll get them when you download the record to your favorite device! How cool is that?

The band is on tour now in Europe, and will be playing a few US shows when they return, and now that Gearhead® is barreling full-speed ahead, I’ll be writing these newsletters a lot more often, so I’ll keep ya more up to date.

For daily updates, be sure to check out the Gearhead® Facebook page as well as my blog and Instagram. I’m slowly getting the hang of all this social media stuff, but if anyone out there has a hankering to help out, I could sure use an intern to help me out!

I’m really excited about the new direction of the business, and the renewed energy and passion I’m feeling again. I am able to look back at my path knowing I’ll never make the same mistakes. New ones for sure, but never the old ones!

If you have something you’d like to share, or a suggestion, or a comment, please feel free to send an email. I’m not the fastest about answering, but I always read them, and at some point, will respond.

Finally, thank you to all of you who have stood by Gearhead® and me with encouragement and support. You know who you are and have my undying gratitude.

Keepin’ the rubber on the road,
Xoxo Michelle

Cheers,
Frank FOE
Posted by Frank FOE at 11:35 AM No comments: