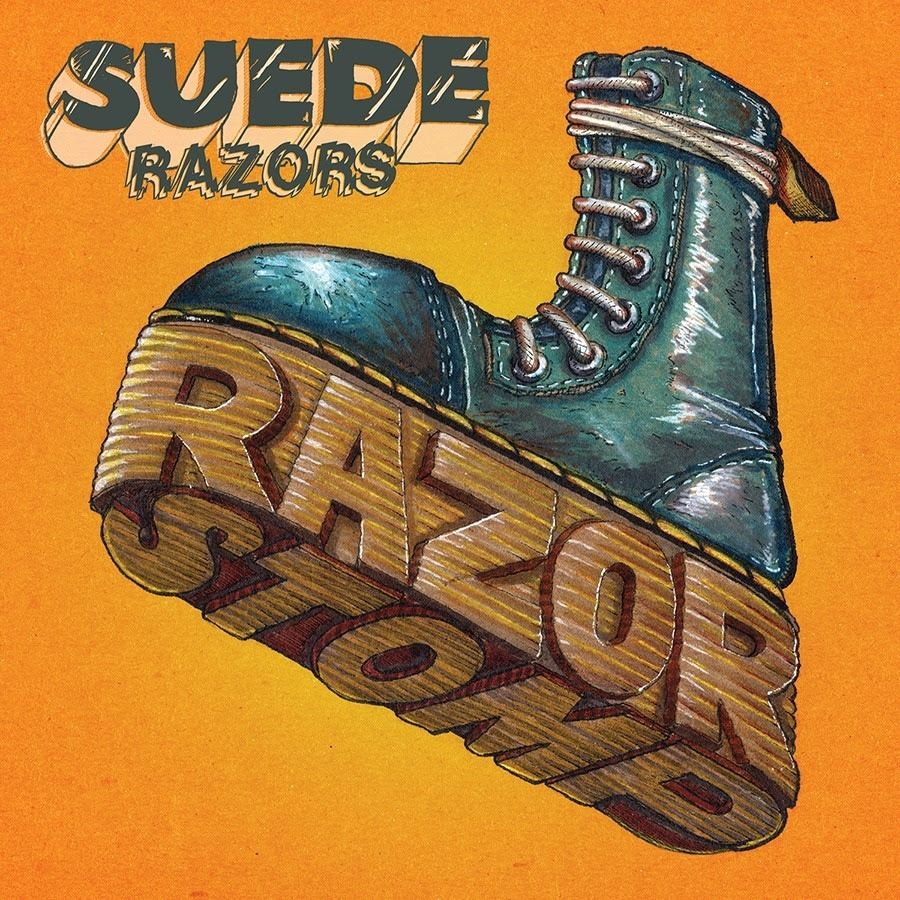 San Francisco Bay Area legends in the making, take the pub versions of the Rolling Stones and AC/DC and mix in plenty of punk, mod and oi to give you a six pack of songs set to tear apart your local tavern.

I love the track "All Nighter", which has perfect keys. Made me flash back to reckless days at places like Wallys, the Funhouse and 4-G's in Bethlehem PA where the music and atmosphere lead the party to levels not normally witnessed. This is good time rock n roll.

Check the video for "Bovver Girl" and prepare to enjoy yourself:

And check "Berlin or Bust" (love the part where the driver attempts to put a Suede Razors record in the car cd player):


Got my copy on orange w/white and grey and blue splatter (450 copies available). 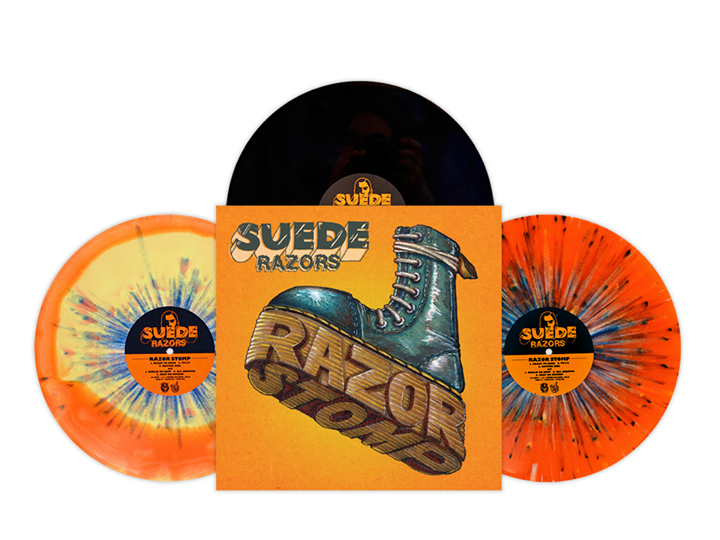 Enjoy yourself with a good stomp to let it all out! 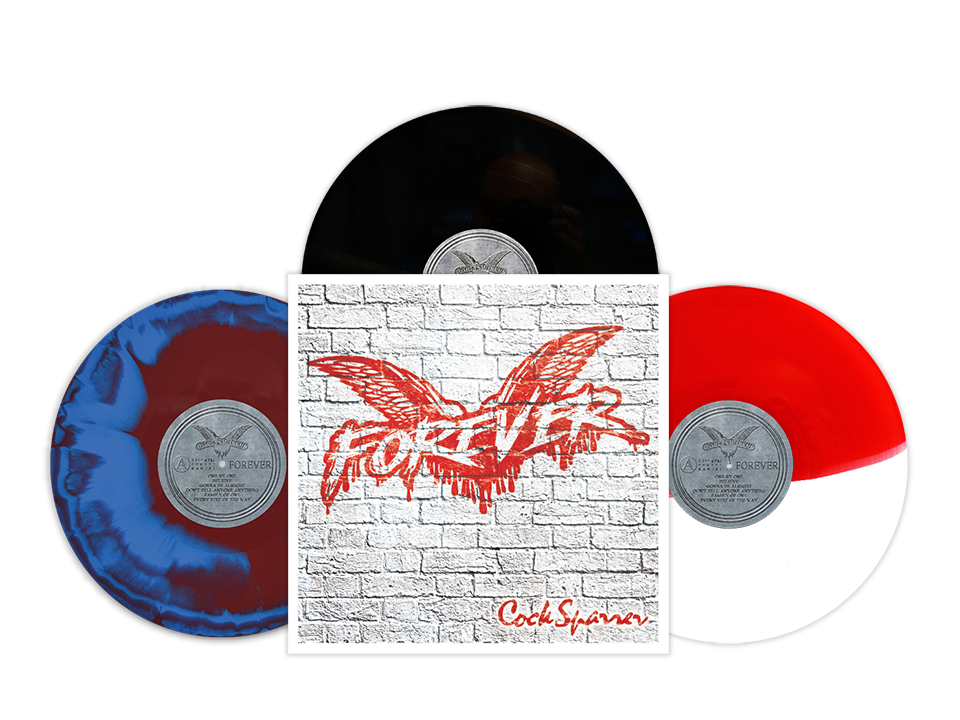 Everyone who loves Cock Sparrer already has this record (CD has 4 additional tracks).

No introduction needed, if you know Cock Sparrer, and know this was coming out, there was no doubt this was going to be an album you were going to get and love.

I pre-ordered the LP in the deluxe, faux leather embossed jacket on claret and blue vinyl.

Of course I did. I have loved Cock Sparrer's punkest tunes from their 45 year career as well as their more melodic material (like "The Sun Says" - probably the first song that REALLY got me into the band oddly enough). I was in a punk covers band (Nostalgia Crisis) for many years and my favorite song to play on guitar was (and still is) "Riot Squad". 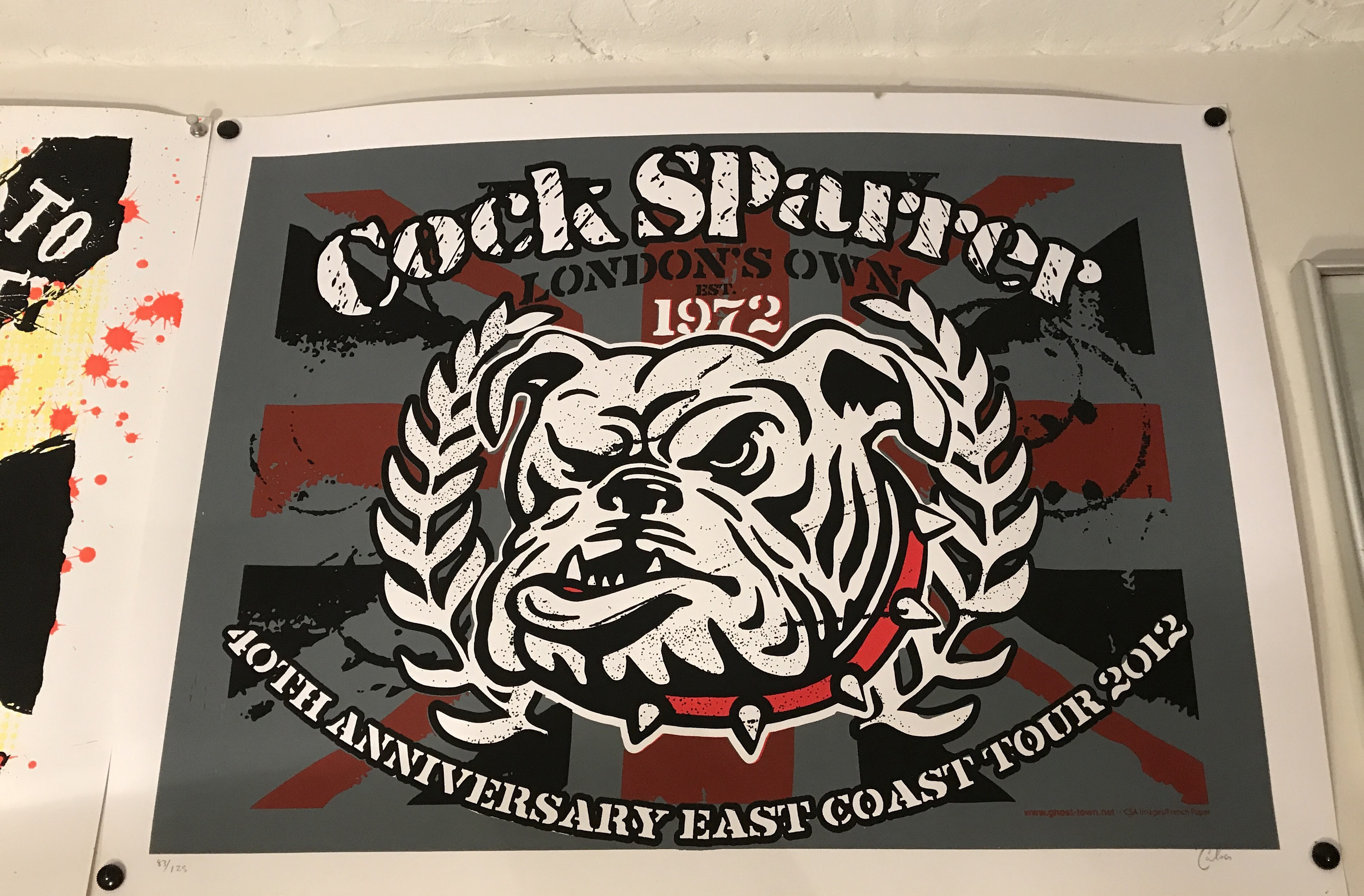 Now. The new, sixth full length studio LP (...that I have 14 LPs in my collection is some sort of tribute to how many times I've purchased the same songs in a different format) is a classic start to finish.

Check the video for the lead off track "One By One":


Old punk and oi bands can sound tired, tedious, dated and are quite often irrelevant... tarnishing their history like a ball player who is playing out their contract but should just quit embarrassing themselves and retire.

Cock Sparrer "Forever" is appropriately titled, as this band churns out classic punk every time. Energized and energizing. Entertaining and engaging. Relevant, timely and focused... and the songs stick in your head.

I've been putting off publishing anything on this record. I had the desire to make my write up somehow as great as the record. I can't do that. Believe me, I have rewritten this review dozens of times in my head since the release back in April. Then I saw a facebook post from Pirates Press that it was three months since the release of this record, and they were asking people what their favorite track was...  That's when I got my focus, to try to convince people to get this record who haven't already done it. My favorite tracks are: "Gonna Be Alright", "Nothing Like You", "I've Had Enough" and "One By One" is one of the all-time great anthems.

There are bands like Business, Cock Sparrer and Buzzcocks who somehow are always with me. Not only do they create great songs, but they help me through this thing called life. 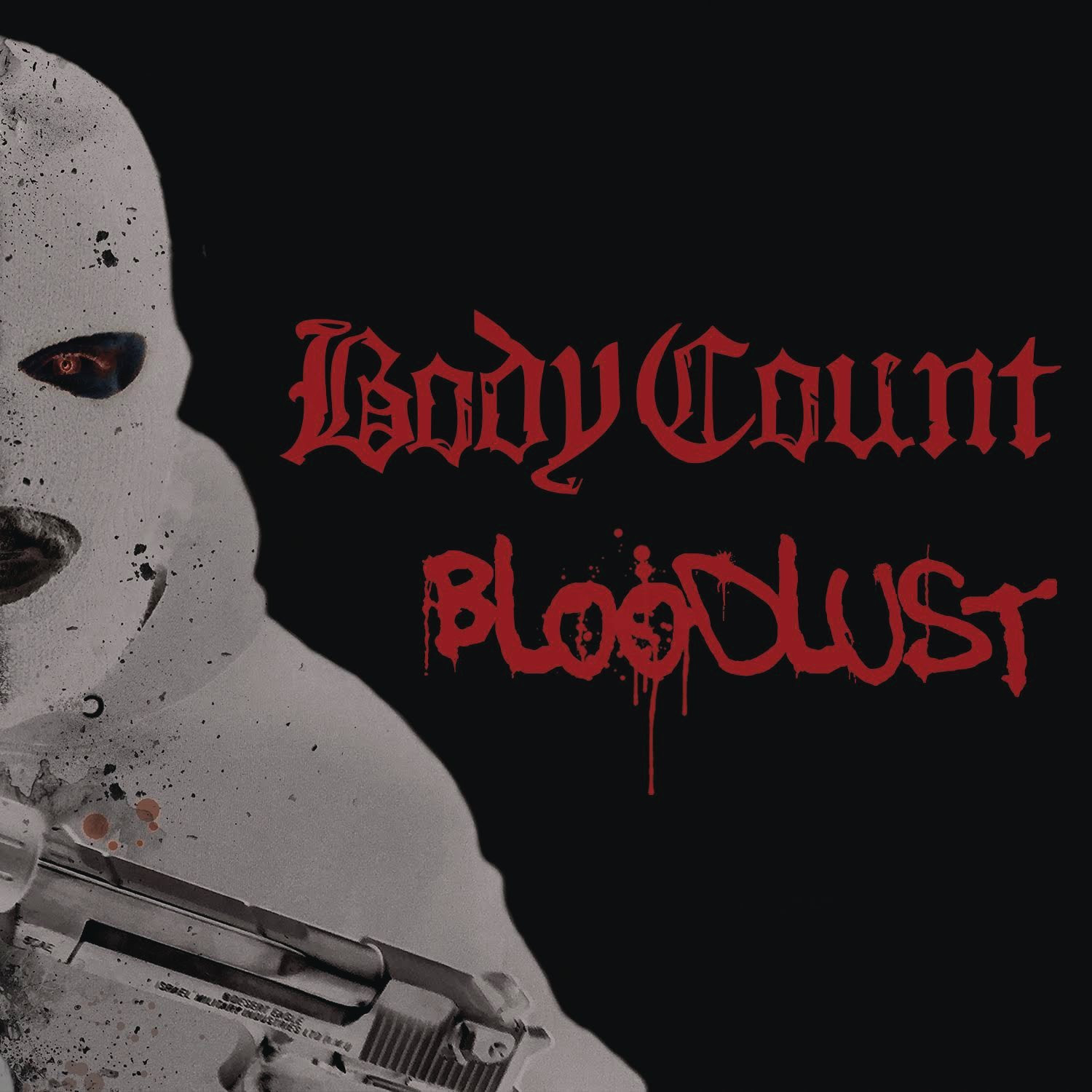 I didn't buy it cuz the vinyl wasn't available yet.

In case you are a vinyl addict like me, then I just wanted to remind you that the vinyl is NOW available.

ad·dict
ˈadikt/
noun
informal
an enthusiastic devotee of a specified thing or activity.

Slayer is my all time favorite band. Has been since I first heard them. They replaced Devo on the top.

Body Count covers "Raining Blood" and "Postmortem" from the Slayer album "Reign In Blood". This video gives me freaking chills, just like the original Slayer versions. When Vincent sings "Postmortem" I lose my mind.


Behind the scenes video:

While you are at it, check the video for "Black Hoodie":

and for fun... let's revisit Ice T and Slayer working on the Exploited...

Oh how I'd love to see Body Count live in Bethlehem PA.

Why not fill out the bill with Slayer, Suicidal Tendencies and Exploited. 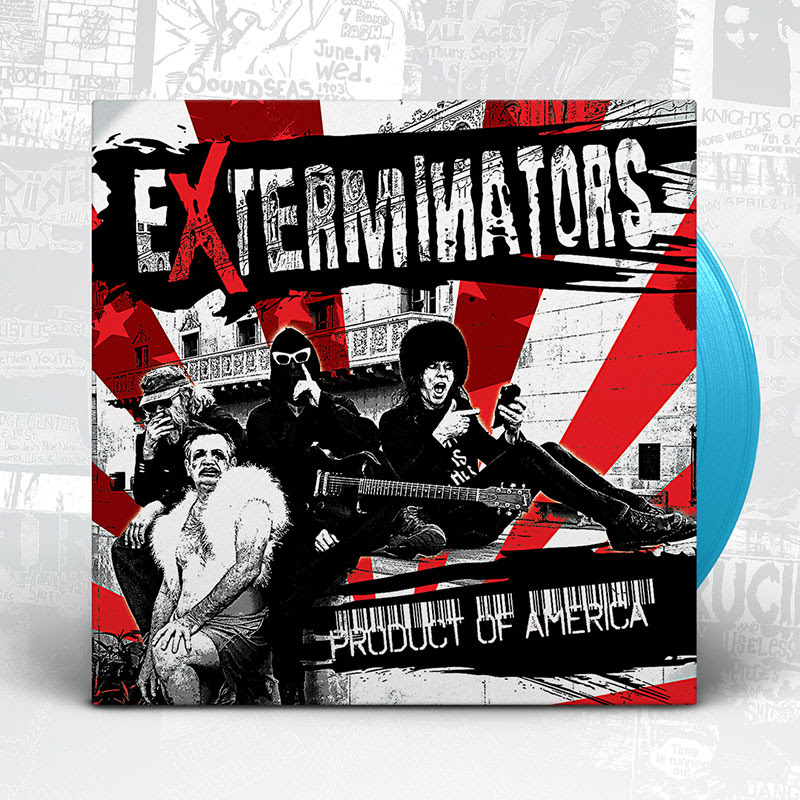 The biggest reason I published a zine, wrote for the Morning Call, DJ'ed countless radio shows on a half dozen stations and continue with this blog, is the satisfaction I get when I turn someone on to music that connects with them. I have always loved turning people on to music they end up loving.

Fact: In the 1980s it was difficult to find and get music. You had to research, read, listen to college radio, buy albums based on the cover artwork, send your cash in an envelope through the US postal service to get records delivered weeks later...

In 2017, if you are connected to the internet, it is easy to get music. But I think it is equally as difficult to find. Why? Because there is so much of it out there it is easy to get lost or miss something that you shouldn't miss. It is also easy to get caught up in convenience. Everything is available, which is an overload.

So I bring you case in point, Exterminators "Product of America".

The record came out last November 2016. I never heard one peep about this record until the summer of 2017. I was turned on to "Product of America" by the band's publicity. I am so thankful they reached out to me. Now I hopefully return the favor and turn you on to Exterminators (or if you were in on this last year, remind you to listen to this again).

"Product of America" was produced by Cris Kirkwood of the Meat Puppets, Exterminators were one of Phoenix Arizona's first punk bands and this LP is a recording of songs culled from a cassette tape of the band performing live in 1978 with the original lineup featuring Dan “Johnny Macho” Clark on vocals, his younger brother Doug “Buzzy Murder” Clark on guitar, Don Bolles on drums, and the late Rob Graves on bass (Kirkwood took over for the departed Graves on the new album). 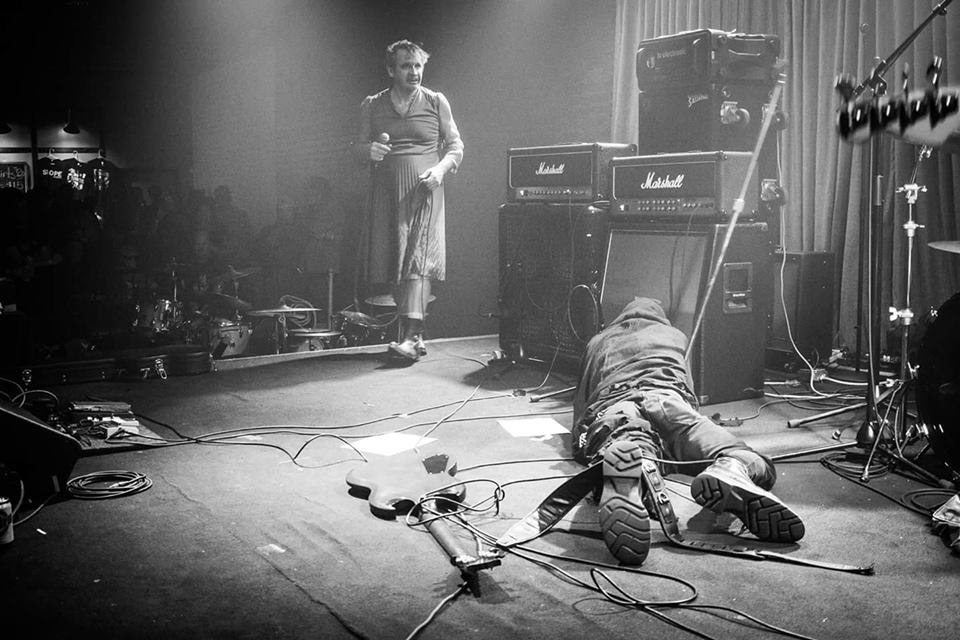 Exterminators formed in 1977 and took a break in 1978 and then let these songs ferment for nearly 40 years.

If the members of Exterminators sound familiar, they are: Dan Clark (vocals) was in The Feederz and Victory Acres, guitarist Doug Clark was in The Brainz and Mighty Sphincter, drummer Don Bolles was in The Germs, Celebrity Skin and Ariel Pink and both Don and Rob Graves were in 45 Grave. 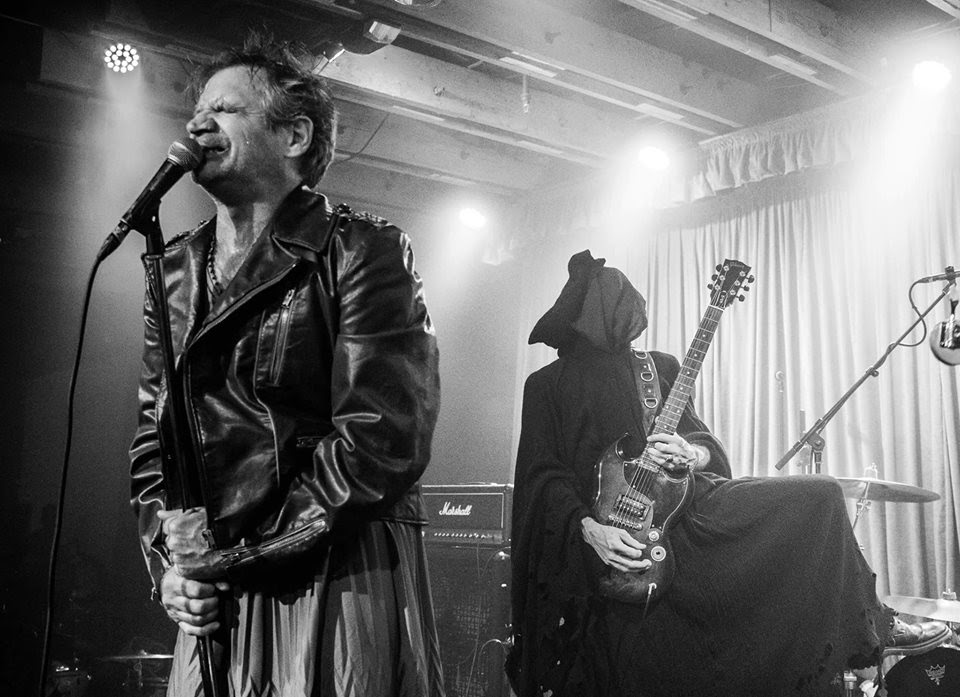 So yeah. Of course this freaking rules. I mean the Feederz, Germs and 45 Grave are three of the biggest reasons I got into Hardcore and Punk in the early 1980s... and Meat Puppets "Melons Rising".

"Product of America" is a ripper from start to finish. The sound is amazing. The intensity perfect. The riffs and guitar work is classic. The songs diverse but fit well together. Chris's bass work is of course on point. 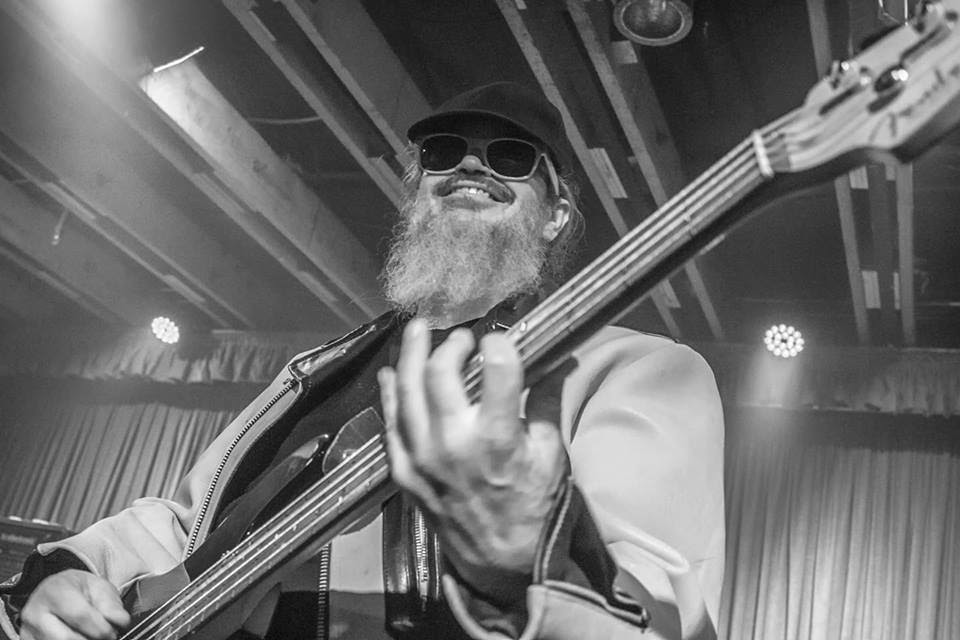 I love Don's drumming. Always have. Precise tight and driving the songs to wherever they need to go.

Dan's vocals snarl like it was 1980. I think I'd have a heart attack at my age trying to do what he does. Hell, what the whole band is doing. It rages that much.

If you have ever liked any of the aforementioned bands (Germs, Feederz, 45 Grave...) or Circle Jerks, Dead Boys or NoMeansNo, you must obtain.

Give "Bionic Girl", "Patriotic American", "First and Last", "Static Planet" (love this song so much), "Mechanized Death" a listen.. They are all great.

Addendum: After receiving the vinyl in the mail, I realize that the writing credit for the song "I Hate You" goes to "Some Kid From The Neighborhood". Brilliant. 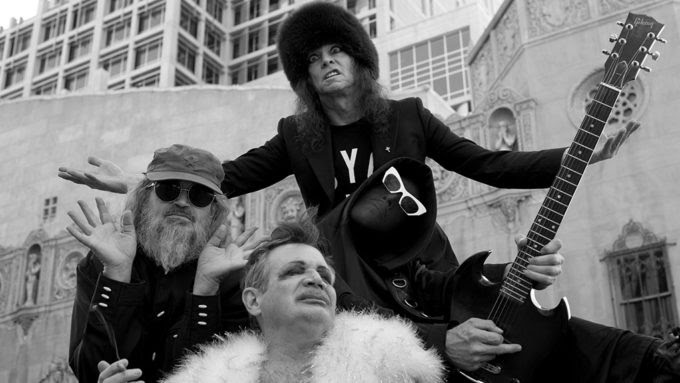 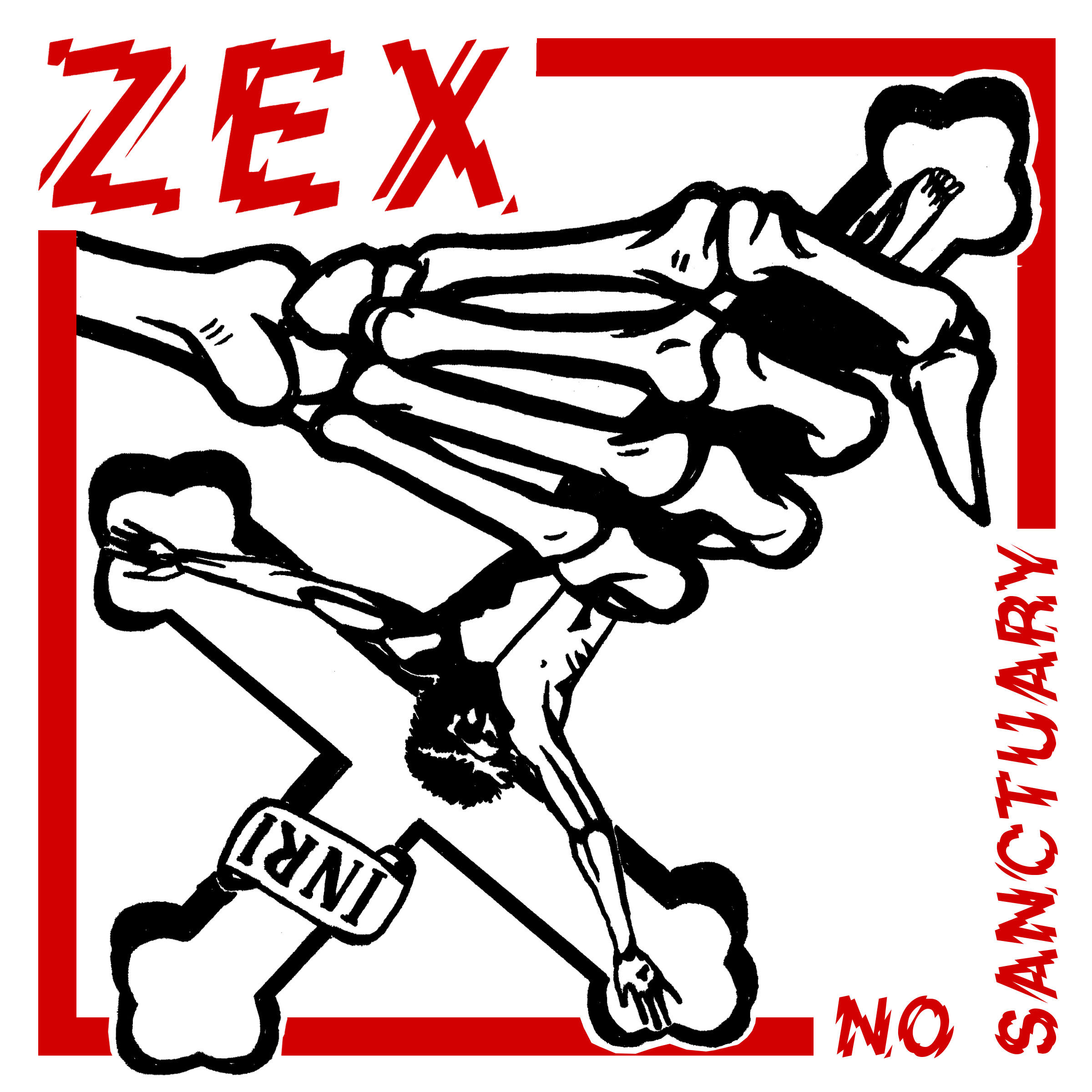 Zex, from Ottawa, Ontario, Canada, fondly brings me back to a time in the 1980s when UK punk bands, with female leads vocals like Vice Squad and The Expelled seized my attention. There was a different sound to those bands.

I already loved female fronted bands like the Avengers, X Ray Spex and X that got their start in the 1970s, but these bands had a completely different feel. Female UK82. Vice Squad and The Expelled were female fronted bands that helped make those "Punk and Disorderly" albums remain among the best punk compilations ever released. 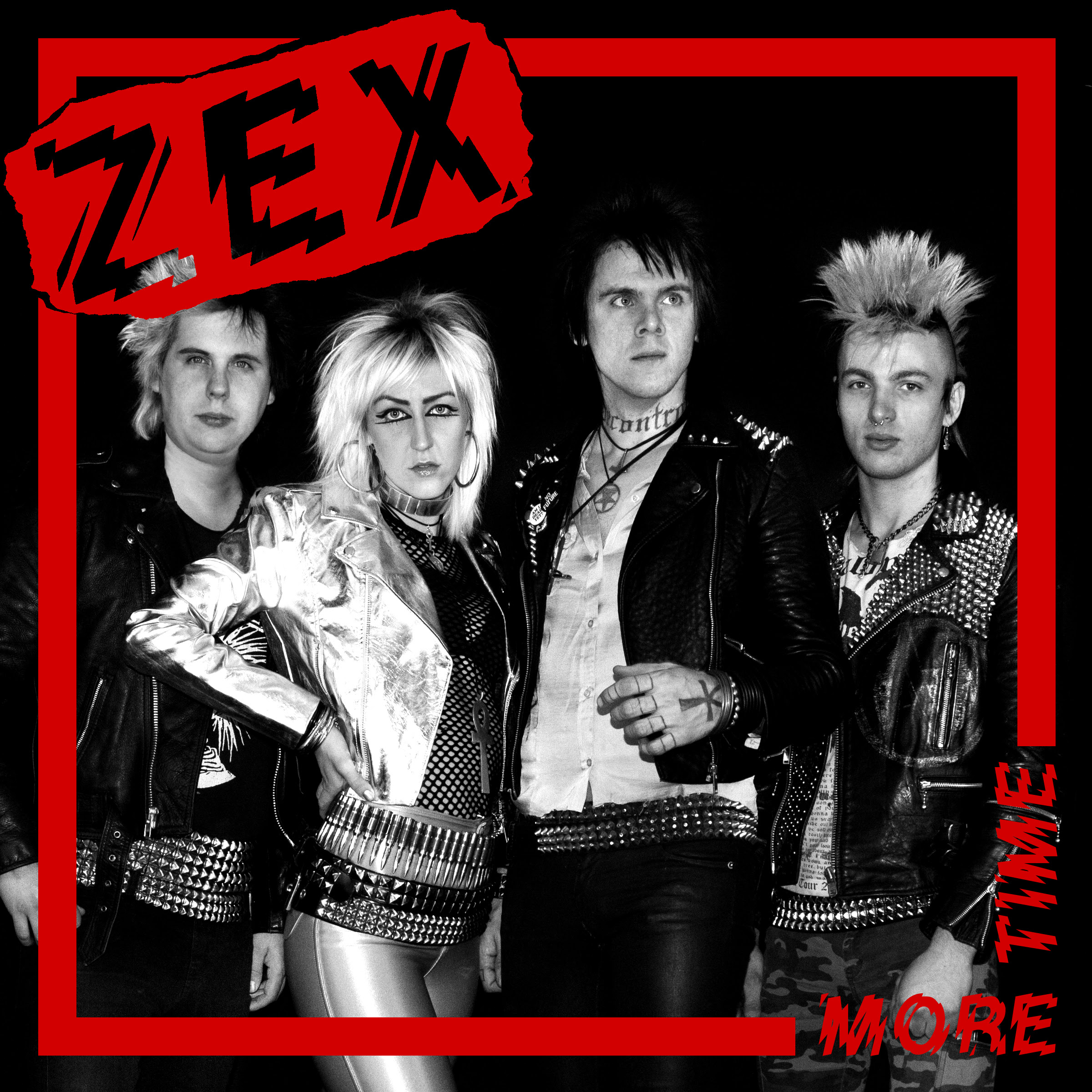 Zex have been around since 2014. Core members are: Guitarist and primary songwriter: Jo Capitalicide along with Vocalist: Gretchen Steel and Bassist Gab Sex. Their debut LP "Fight For Yourself" from 2015 is mandatory punk. My write up here: Zex "Fight For Yourself" 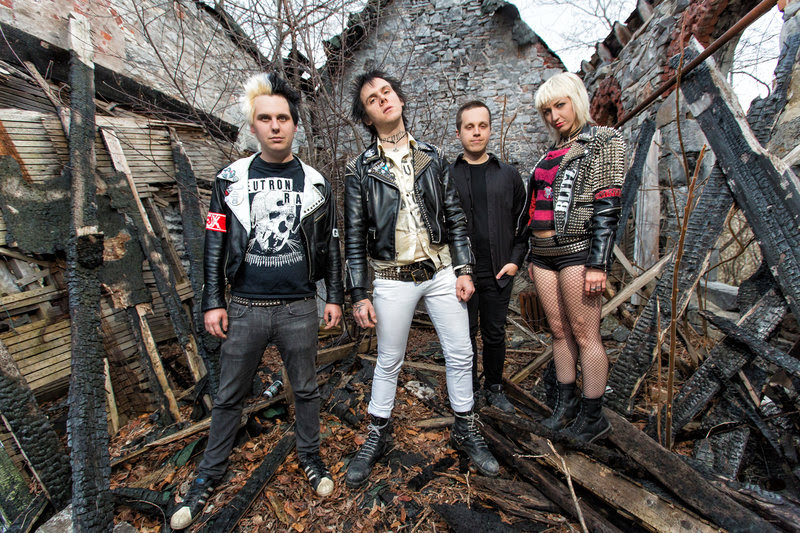 Check out the video for the A-side of this 7" and understand exactly what I am talking about. 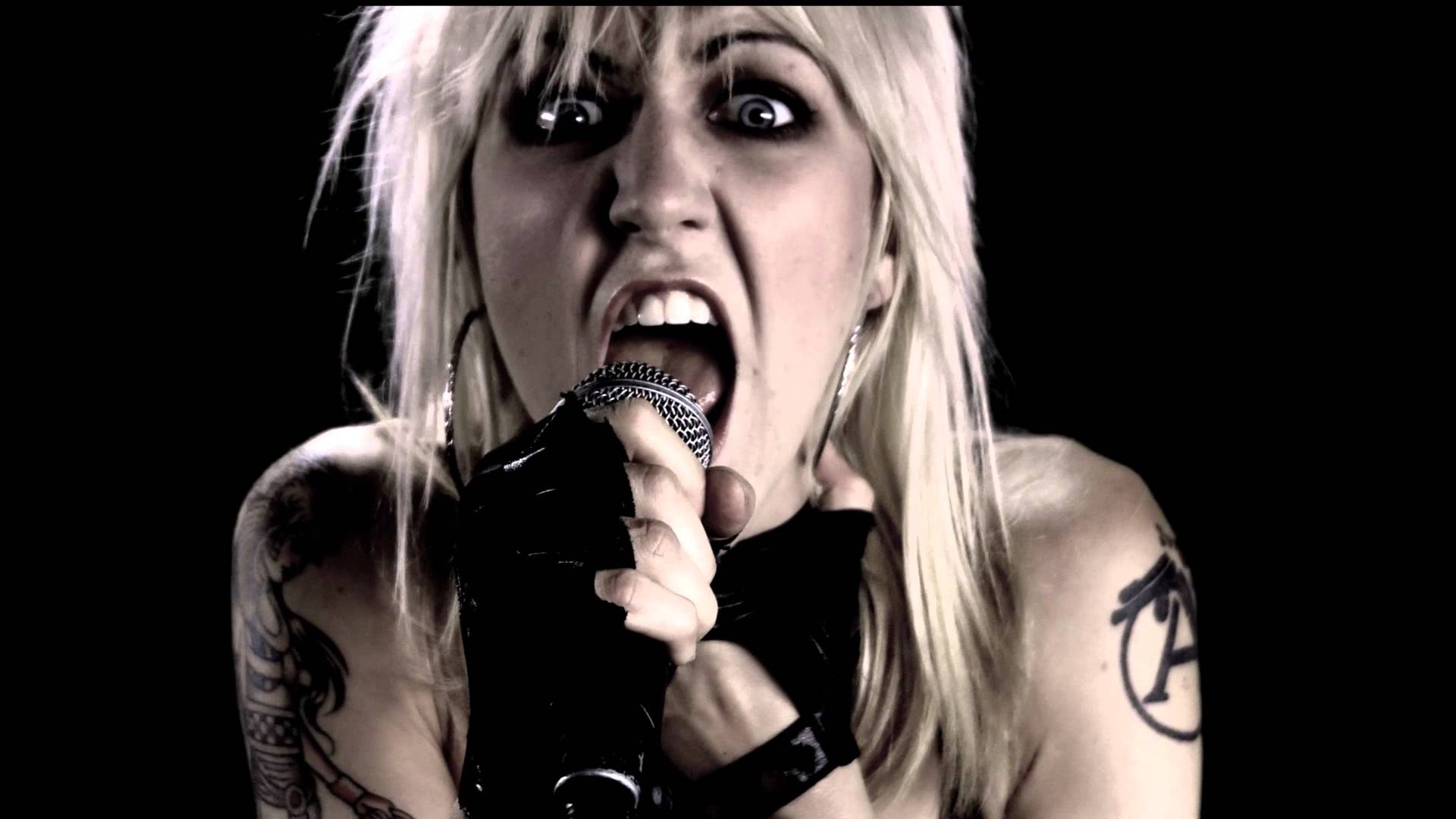 Violated Records (Philly) has released the 7" on three colors: 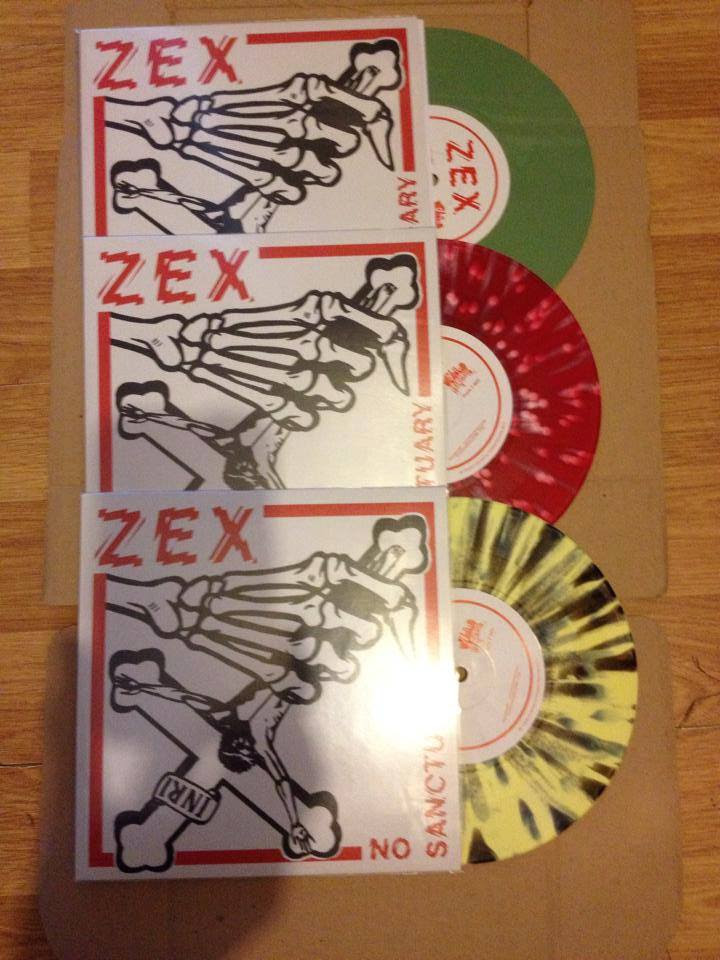 UK82 updated to ON17, ON of course being the abbreviation for Ontario. 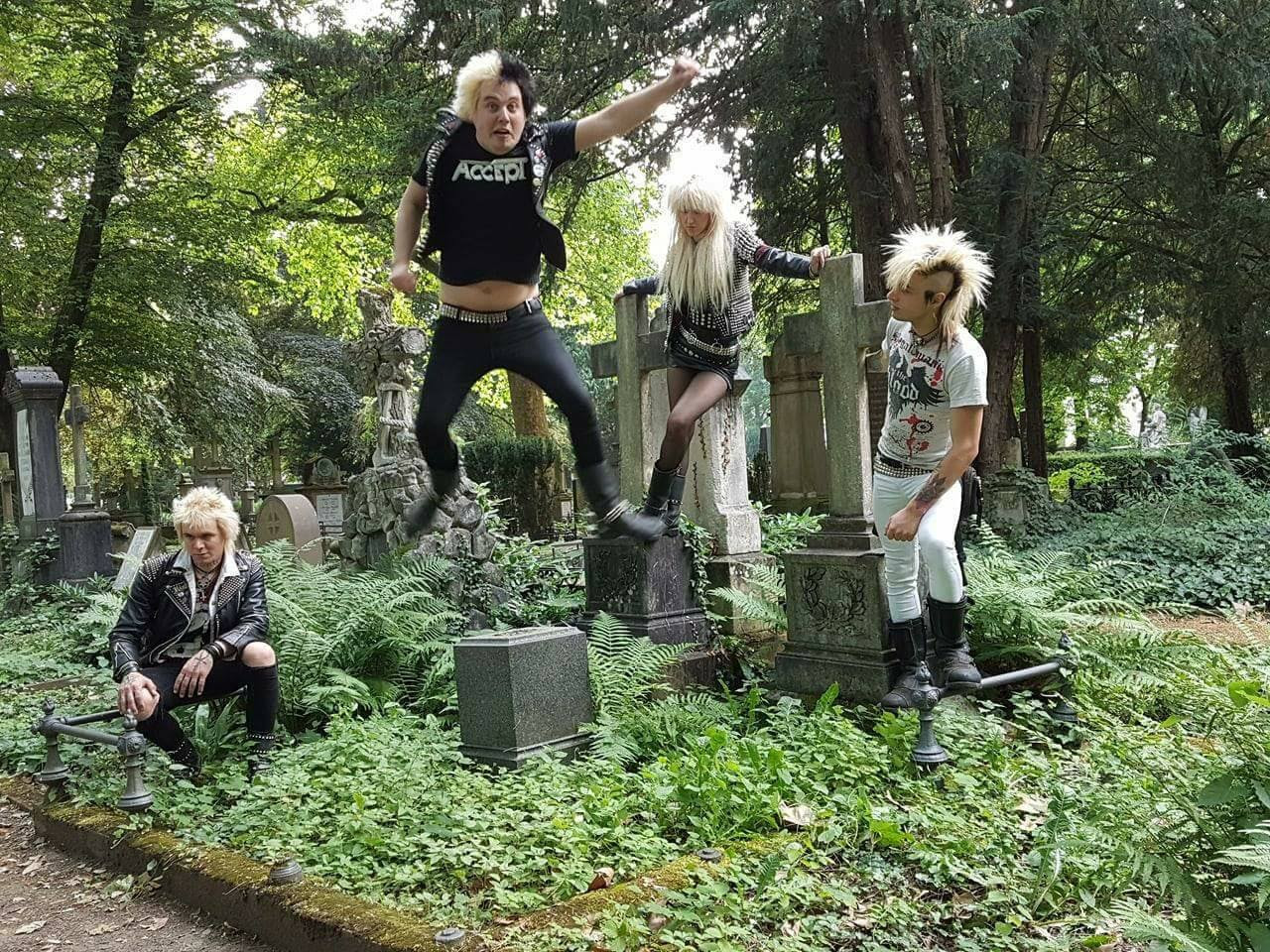