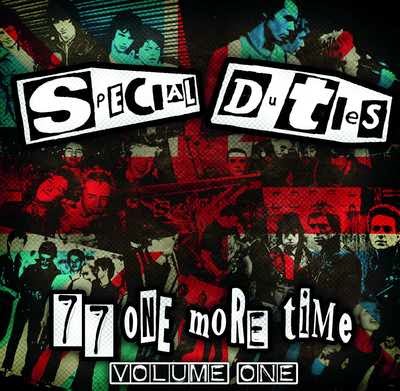 If you like street punk, UK82, oi or dirty US punk rock, I would imagine you already have at least one of the following versions of this Special Duties record: 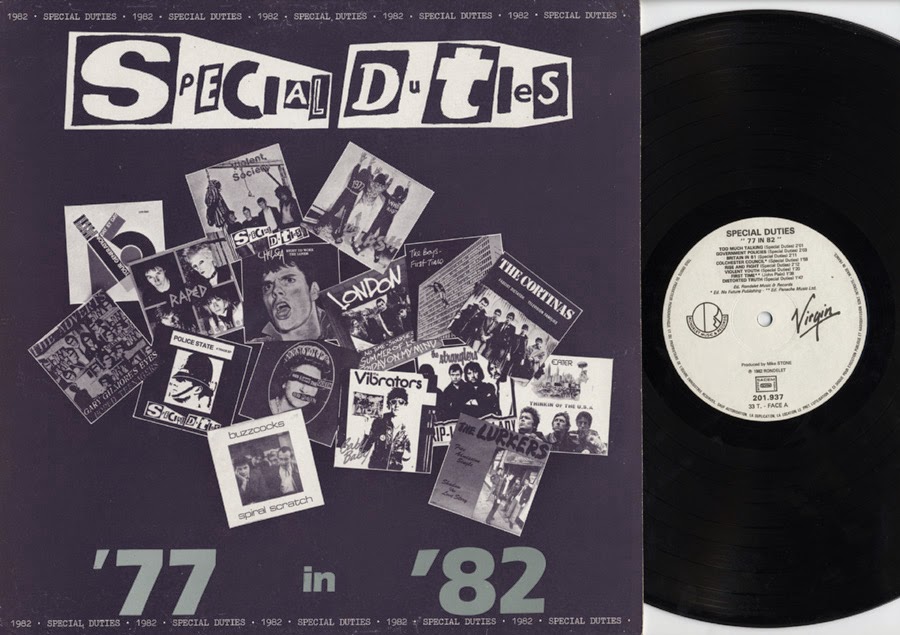 Whether you were around in the early 80s, or got into punk in the 90s, 00s, or 10s, Special Duties has been one of those bands that was mandatory, once you dug in beyond one of those introductory punk bands. This is real deal material. 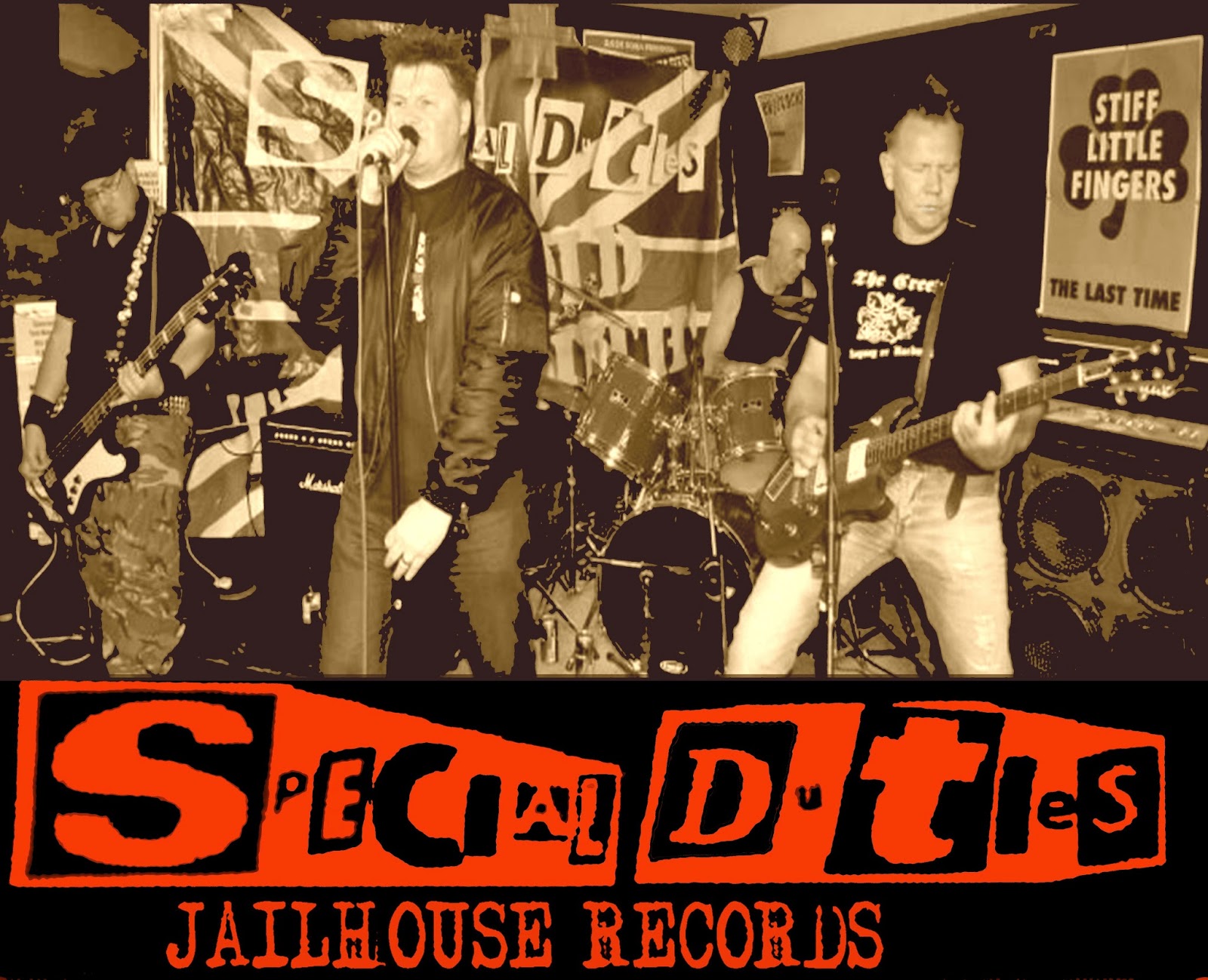 Rondelet released the first album in 1982, then Captain Oi and Get Back (also included 7" tracks on the LP) did their reissues in 1997. So it looks like every fifteen years or so, it is time to reintroduce Special Duties to the punk masses. Thank you Jailhouse Records. And I understand from Special Duties fb page that the records are moving fast, "First lot of vinyl is pretty much sold out, so re-press is out again in October...". 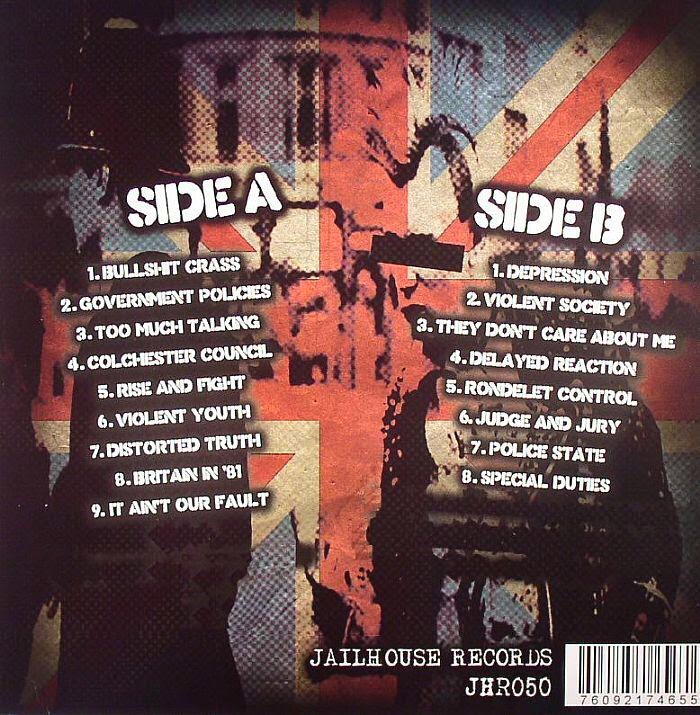 So, if you don't own this on LP yet, please, please do not wait another 15 years for someone else to release this album. Get one of the October pressings! 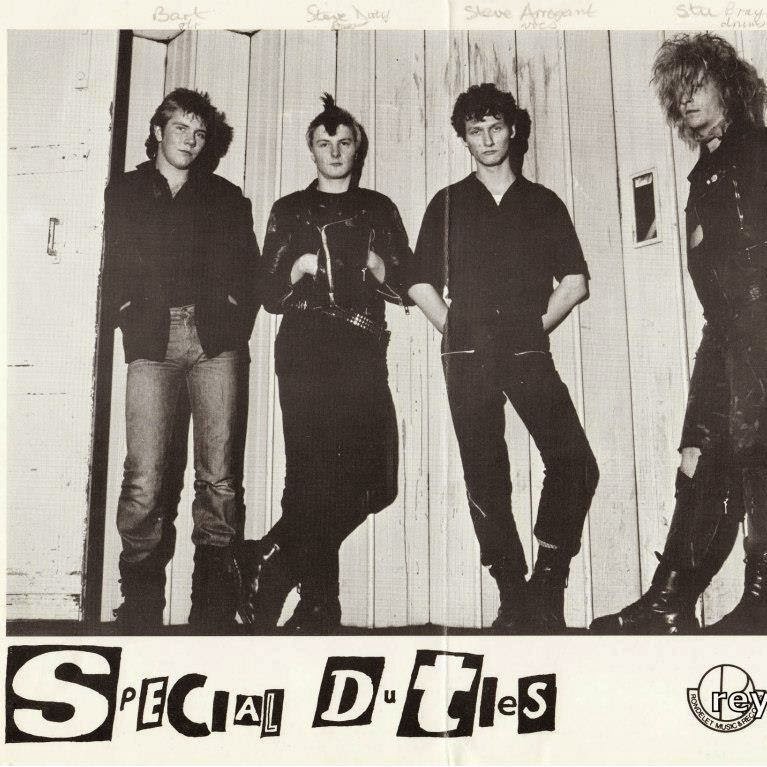 As for the "remastered" and "restored" don't worry, you can't pretty this up. This is as raw as the day it was recorded. But I will tell you, whatever "restored" and "remastered" means, this sounds fantastic and fits right in with so many of the bands playing this style today. I have the Captain Oi and Get Back records for comparison and this new version rips. I was around in 1982, but even then, it was difficult to score this record, as evidenced by my reliance on a Maxell tape version until 1997. 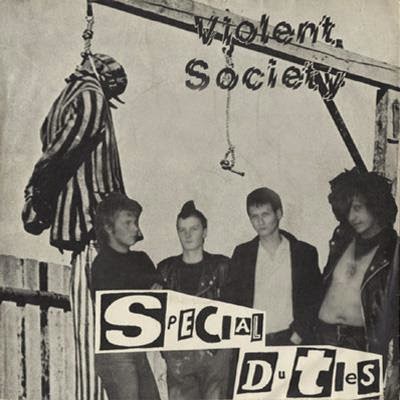 Classic, mandatory street punk. So many great songs. Blunt, simple, to the point and legendary. I love this record. It makes the blood flow faster, makes the brain electricity rev and activates the crazy, unhinged feelings. Inspiring, pounding and energetic.

You go town on a Saturday night
You just ain't happy till you've been in a fight
You have too many, get out of your head
You don't know why but you wanna see red

VI..I..I..OLENT YOUTH
Who you looking at that's my bird
How many times has that been heard
Excuse for trouble, excuse for a fight
Happens all the time, every night 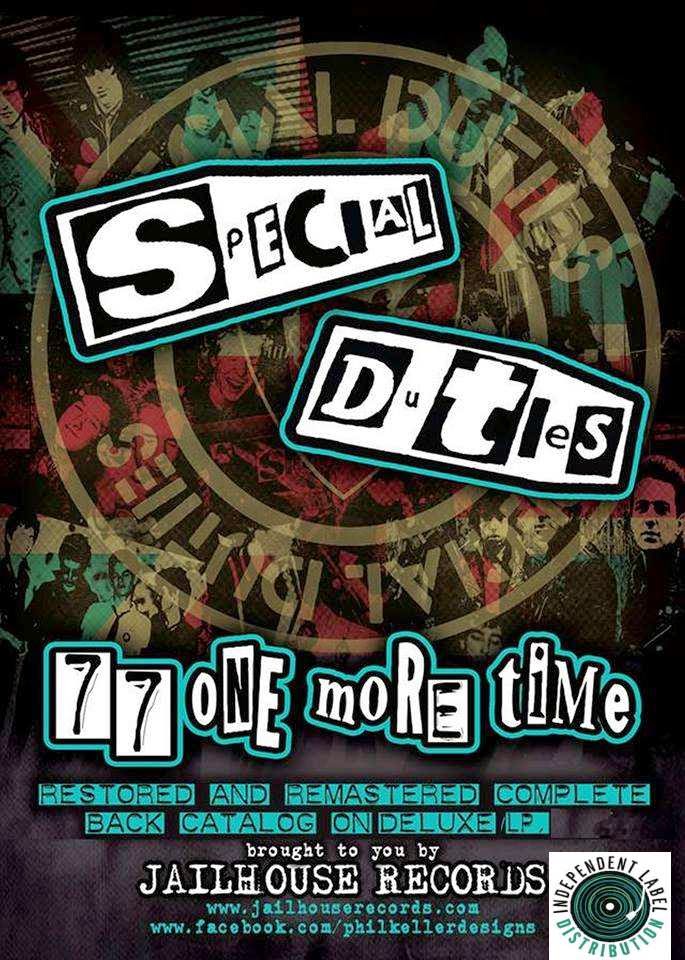 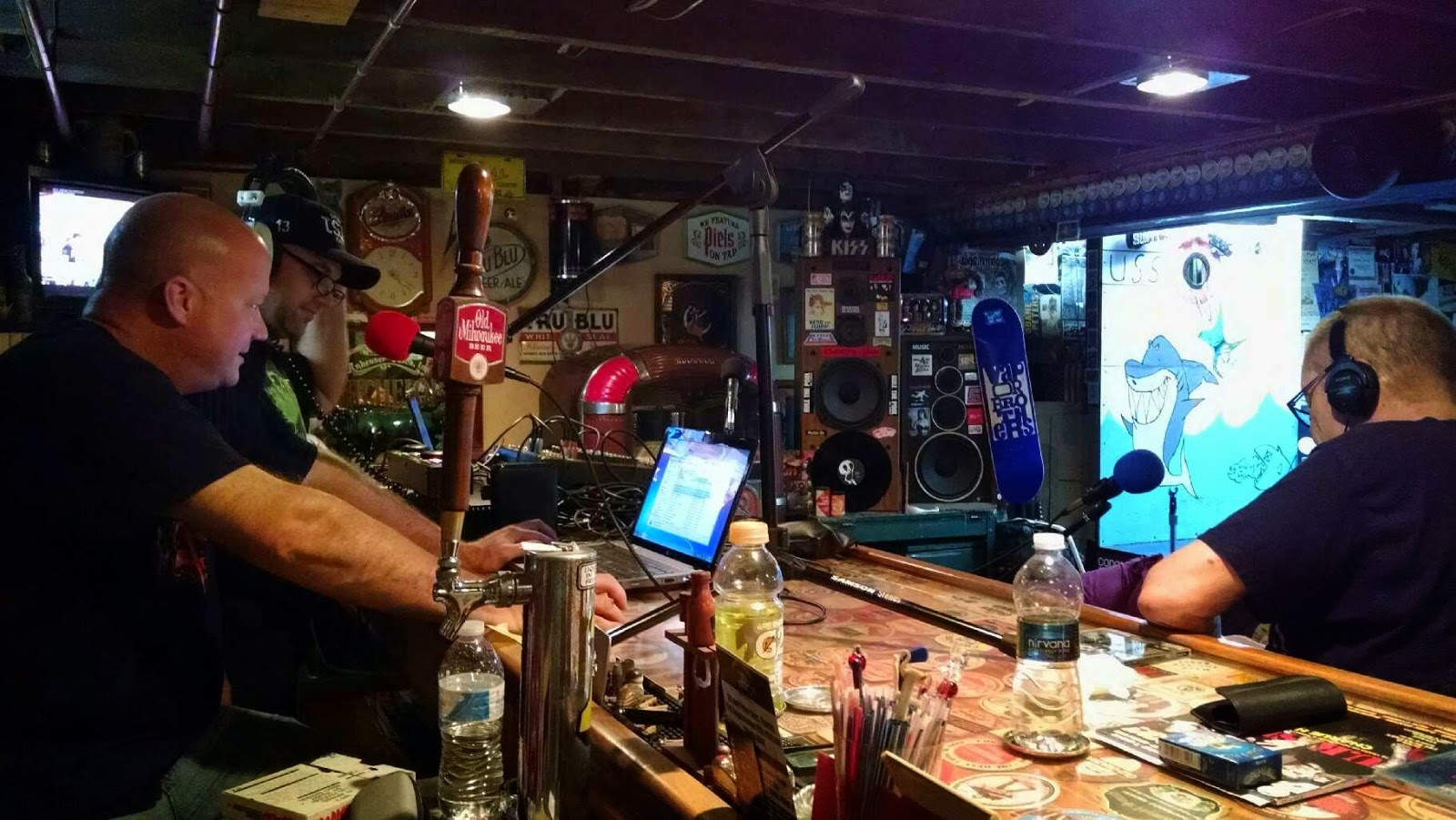 This show marks our first broadcast from Red's basement.

We no longer edit out the cuss words. So you know. 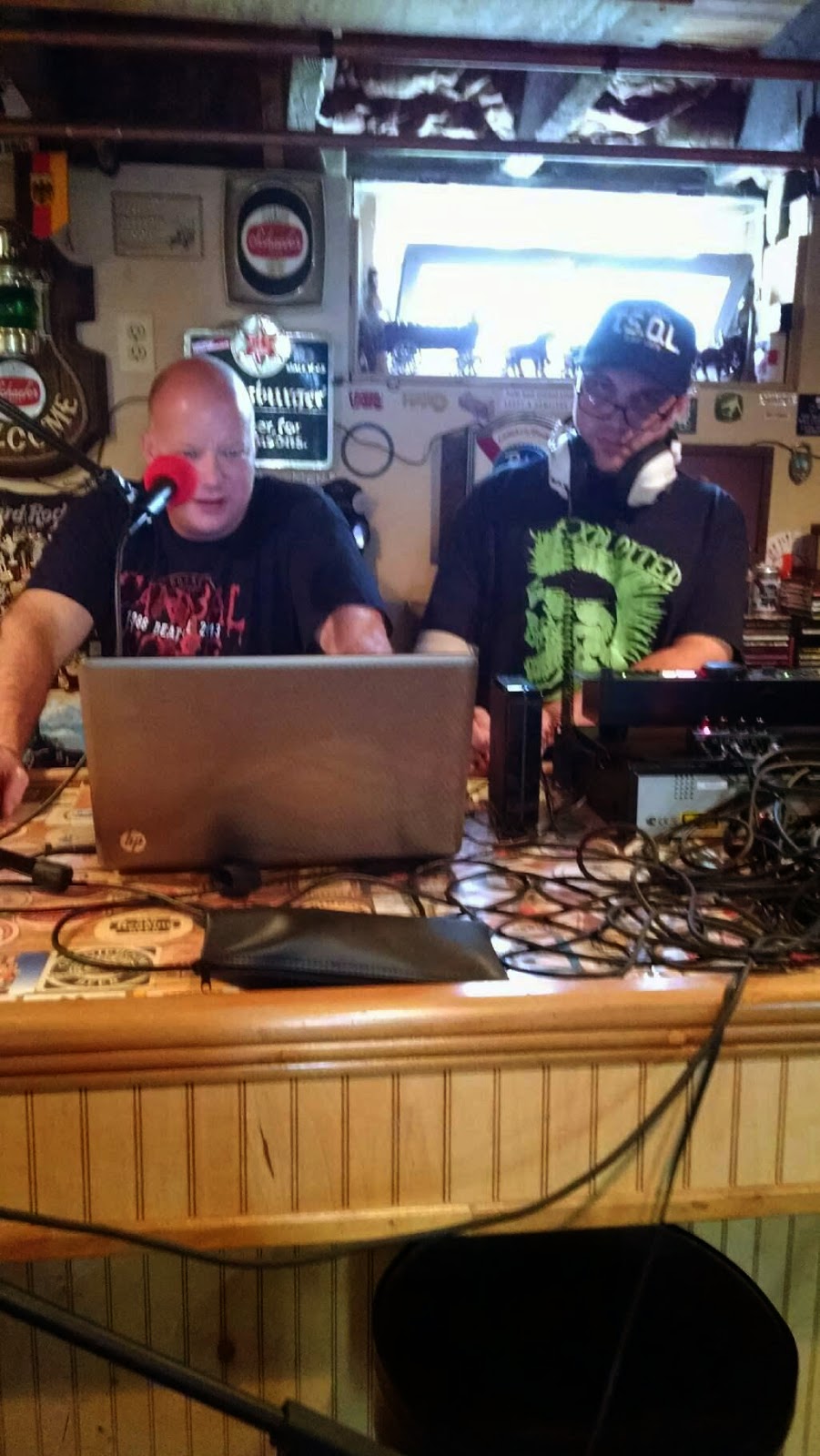 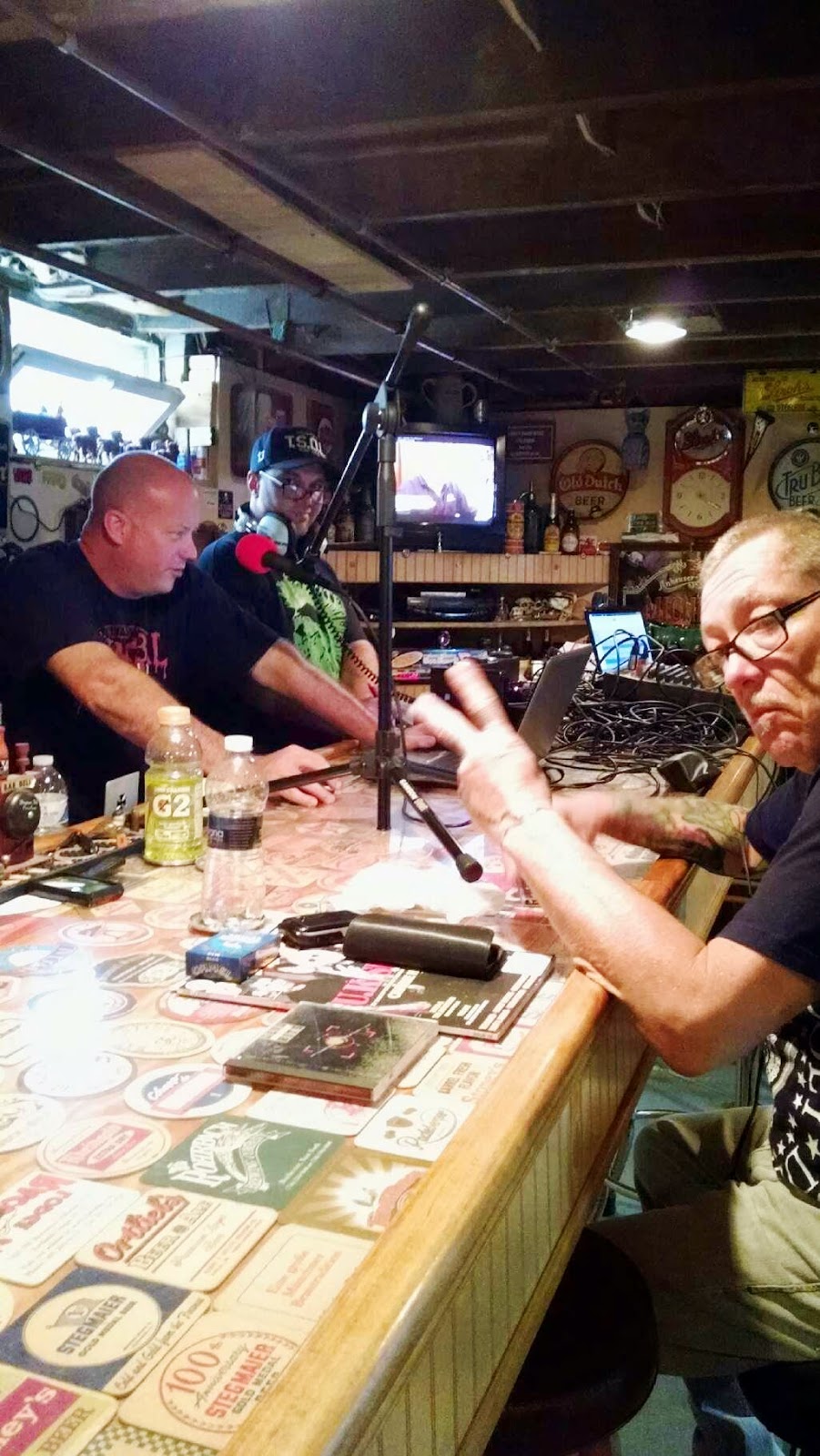 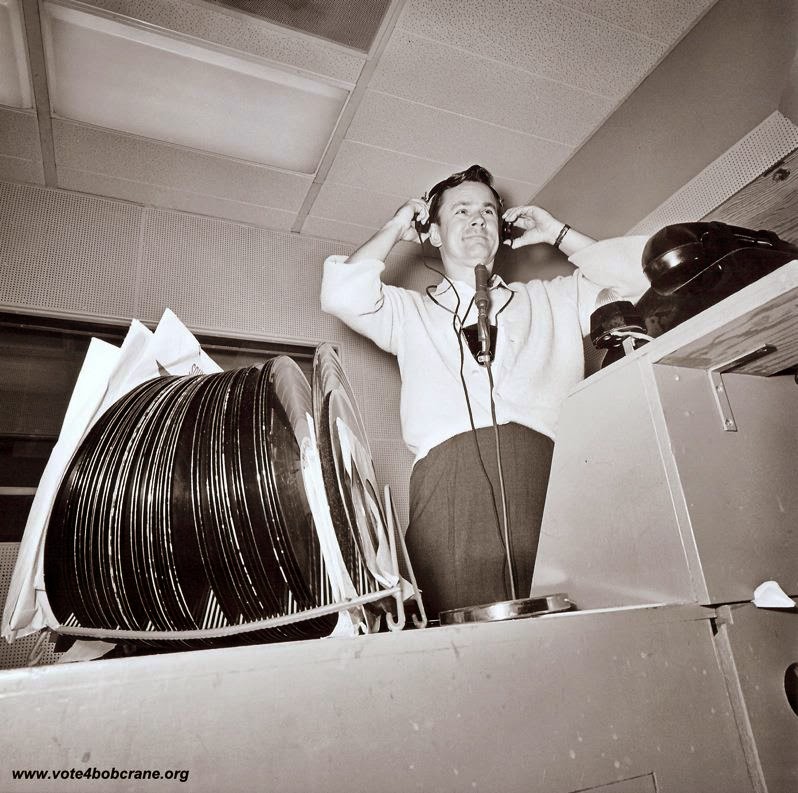 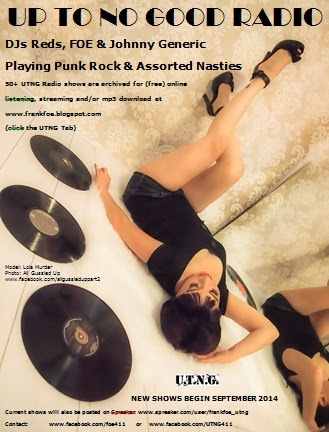 US Chaos "Last Call For Alcohol" 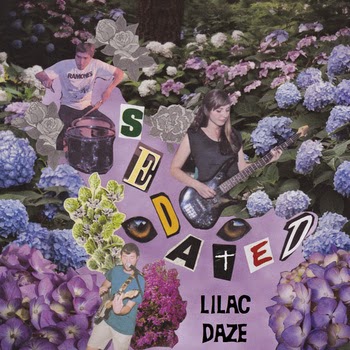 The Lilac Daze bio reads: Lilac Daze is an indie punk band from Frederick, Maryland. Formed in December 2012 out of a mutual love for bands like the Pixies, Weezer, and Superchunk, Lilac Daze consists of three best friends who spend most of their time in a moldy practice space writing music and drinking good beer. 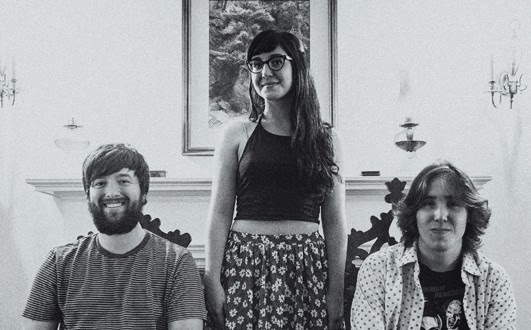 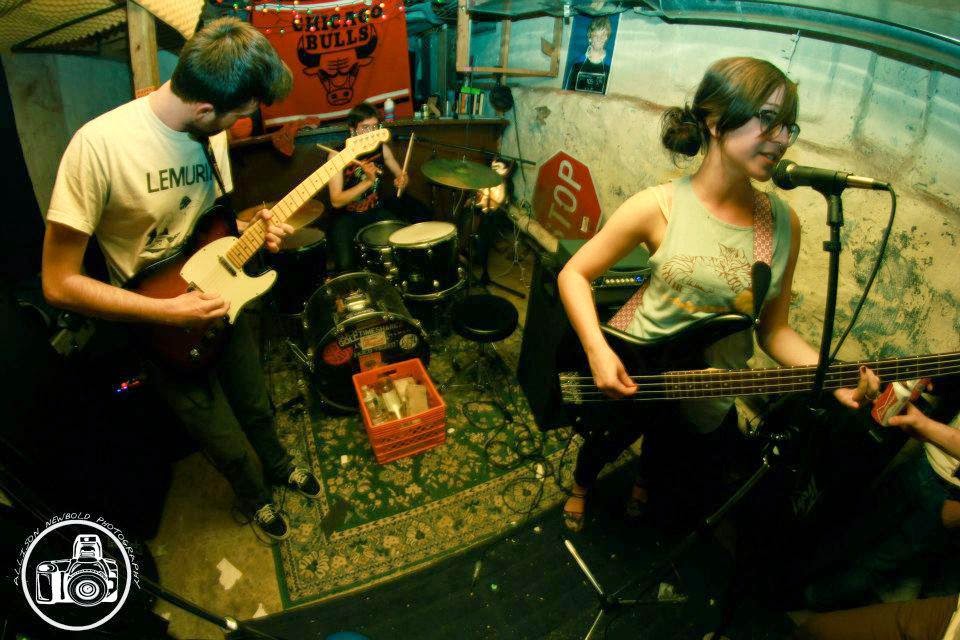 The six songs on "Sedated" blow by in 13 minutes and remind me of vintage Superchunk; full of driving, rhythmic, blistering pop punk that makes you want to keep turning it up louder and having a great time. 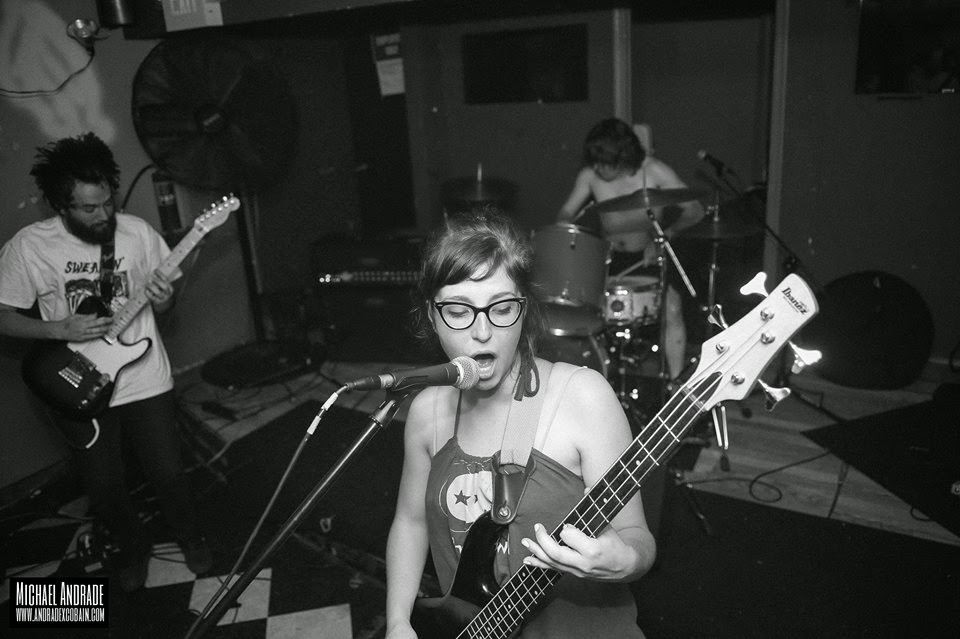 I have seen Superchunk live about a dozen times in my life. They always took me on a aural, life affirming journey. I would love to see Lilac Daze. If "Sedated" is any indication, I am sure this three piece can wreck a hall/club/basement, leaving everyone a sweaty, smiling mess, just like Superchunk. 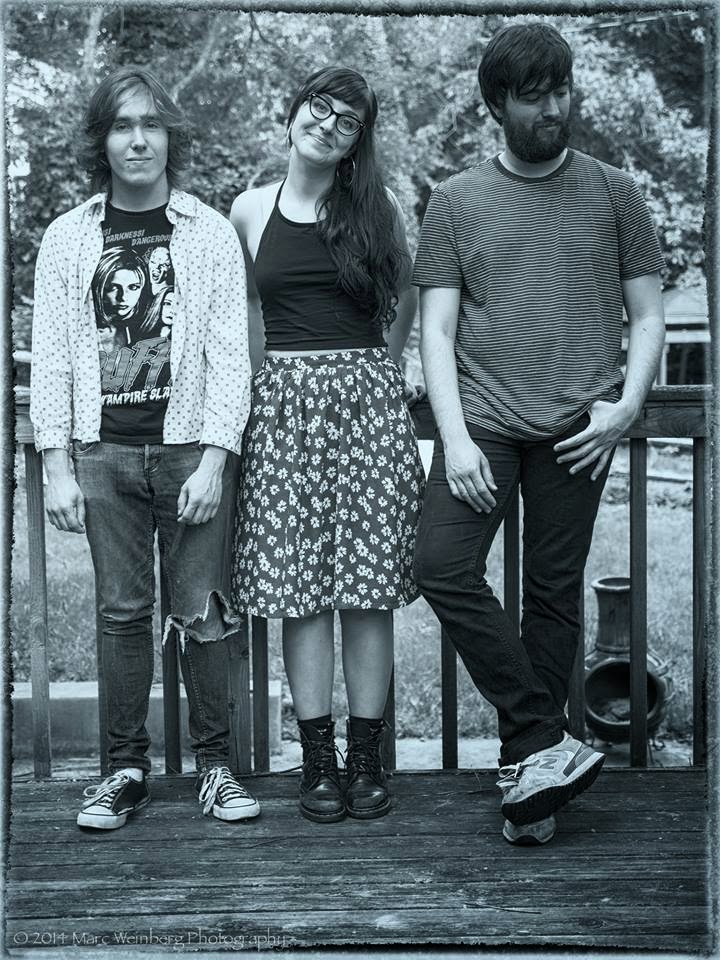 Loving the energy, the realness, the honesty, the all out rockin', the joy of the whole EP and the freakin' blistering "Life Scout".

I'm in love with this EP.

Give "Sedated" a listen at Lilac Daze's bandcamp page: http://lilacdaze.bandcamp.com/ 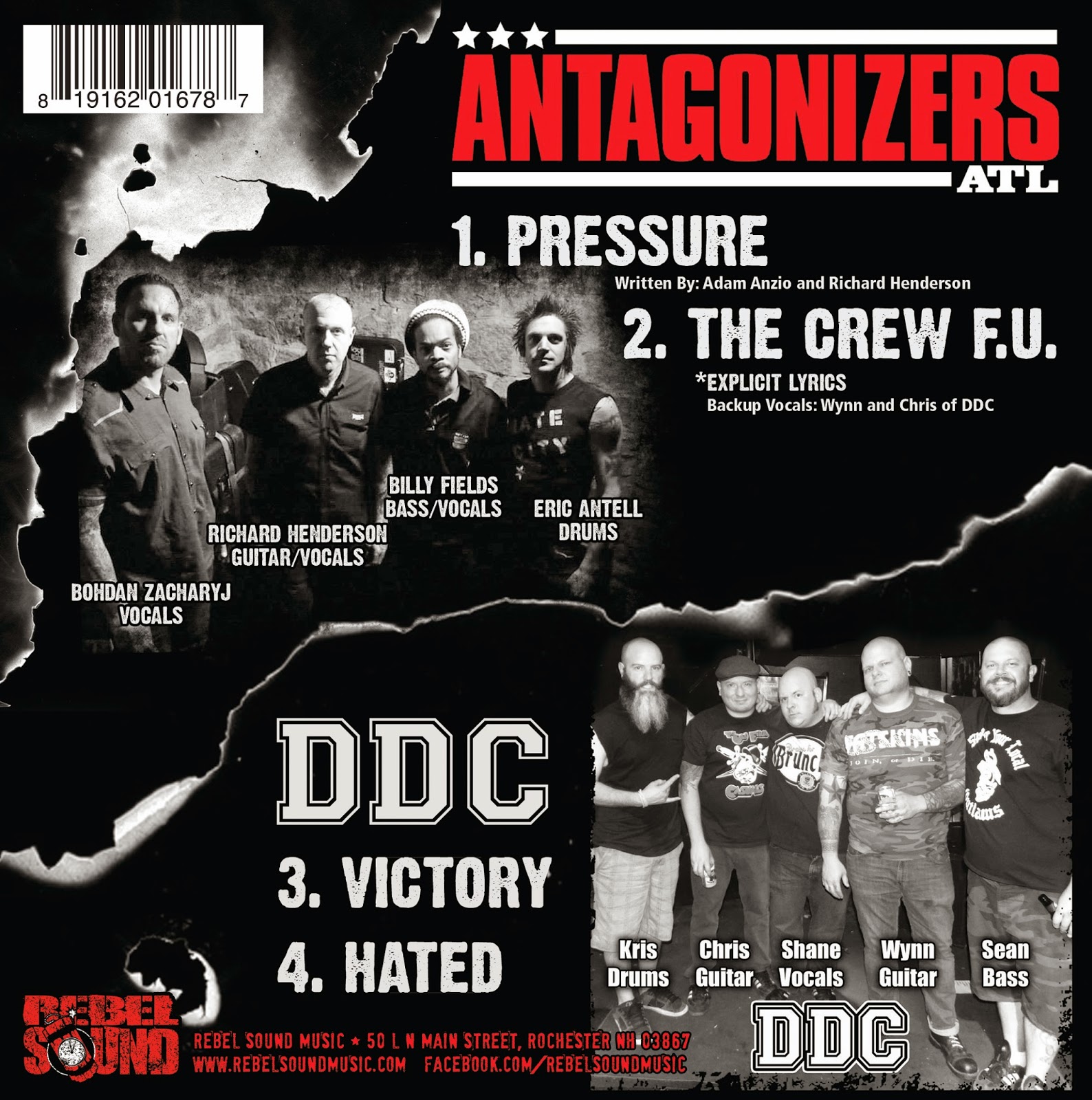 A few things that tend to hold back Oi releases are sloppy musicianship, lack of energy or the opposite extreme - overproduction. Antagonizers ATL and Drink & Destroy Crew have no worries. This is tight, fierce, energetic oi. No nonsense, full of piss and vinegar street punk that is tough sounding and is the kind of music that riles the blood. In other words, they live up to their band names and the lyrics add the exclamation point. 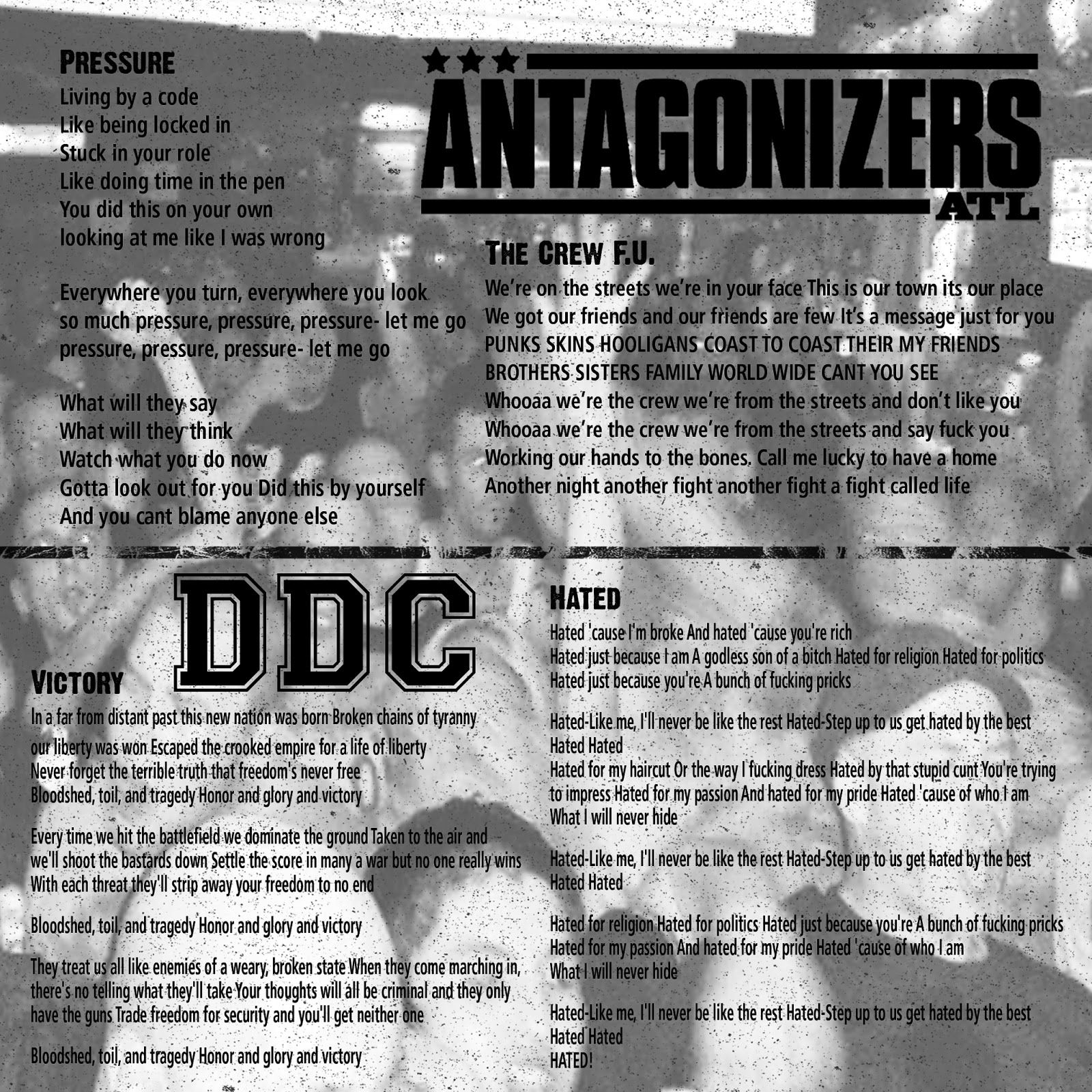 Check out this video for DDC's "Victory" track.
https://www.youtube.com/watch?v=UrVn41w22aw

Check out this video for Antagonizers ATL "The Crew F.U." (explicit).
https://www.youtube.com/watch?v=11O-WB1_dCs&list=UUe2EWCKWUtFKklA_wB13lNw

It really isn't necessary to mention as a selling point that the roots of Antagonizers ATL wander through the likes of Anti-Heros, Condemned 84 or The Glory, as these tracks stand strong on their own merit without any added hype. 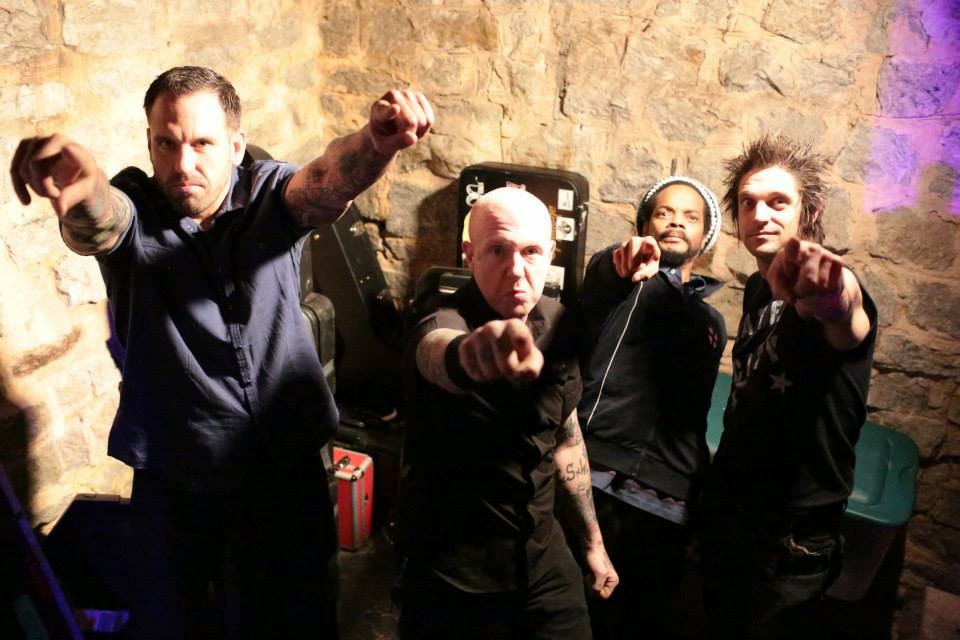 Top notch 2014 Oi!. Limited pressing of 200 Black vinyl, 200 Red with Black Splatter or 200 Half n Half Red and Black. That is why I am publishing this review thirteen days before the release date on Rebel Sound. You need to get in on this great record before it disappears. 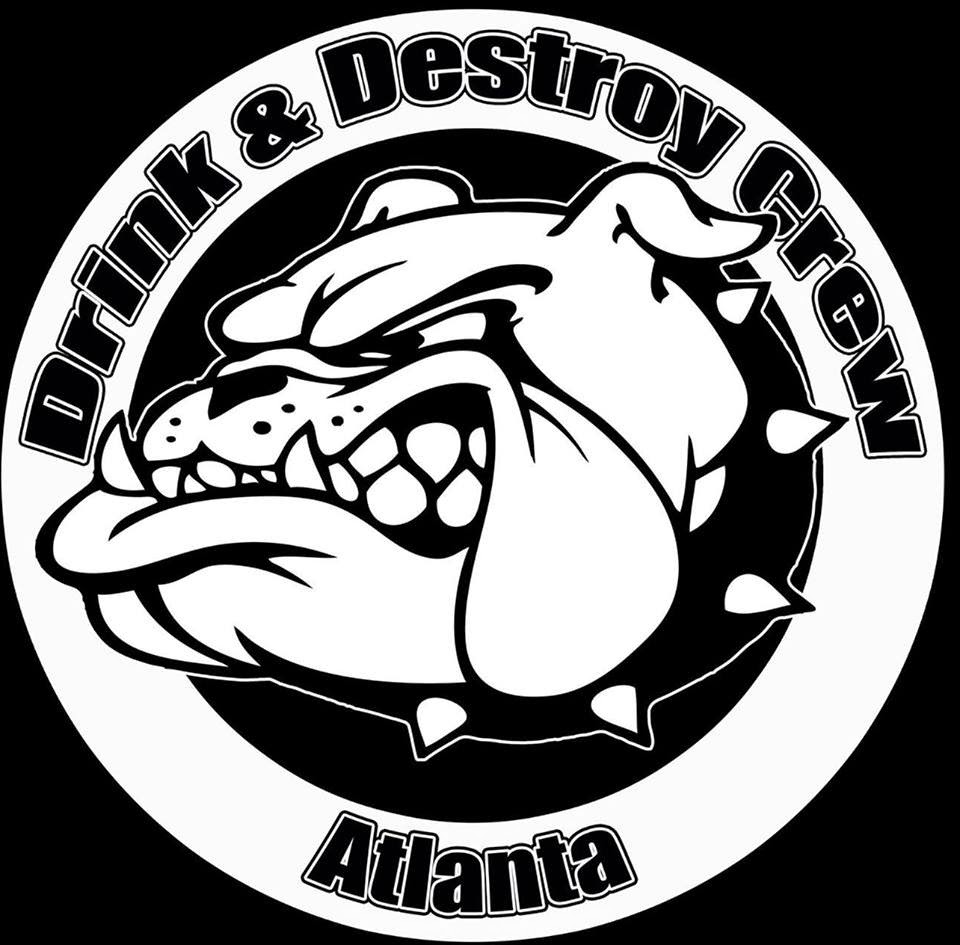 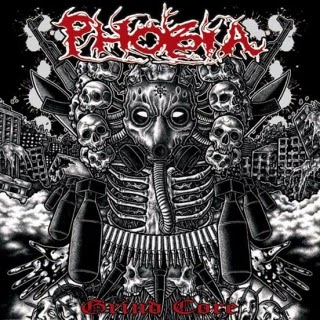 To be a grindcore band and name your EP "grindcore" is a very bold step.

Then again, no one would have had a problem had Negative Approach called their debut EP "Hardcore". I seriously doubt anyone is going to have a problem with Phobia naming this EP "Grindcore", 24 years or so into their career.

For giggles, I went to dictionary.com to see what they thought about "grindcore": 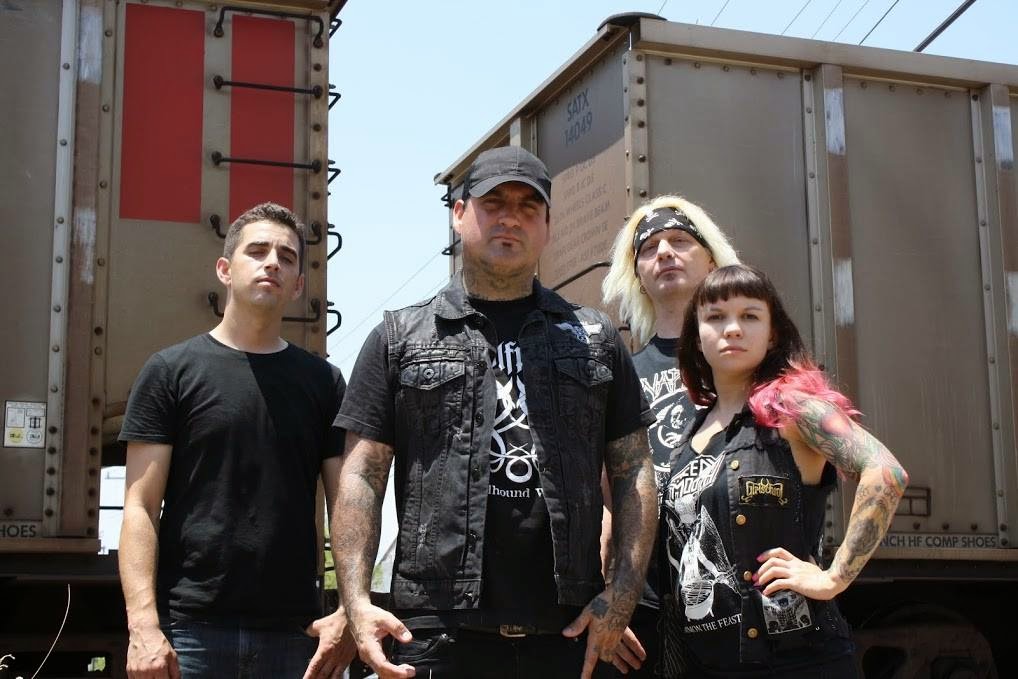 For me, Phobia's "Grindcore" EP is mission accomplished. Cram as many blurred guitar riffs into as short a time period as possible and just explode. I have always loved the genre, as the best of the style is played so fast it sometimes slows down time. So fast it sounds like the beats per minute is that of doom sludge rather than as fast as you can say 1-2-3-4. That is how I perceive it, how my brain processes it. I don't expect anyone else to understand. The best bands do this for me. "Grindcore" does this for me. Hardcore + metal + punk + blender at highest speed. 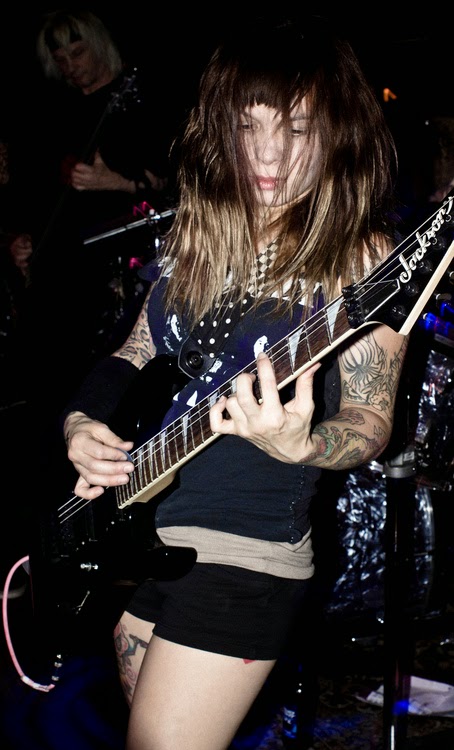 Phobia, "Grindcore' and grindcore in general, makes my legs twitch in a spastic blur and the head automatically bangs. Cause / effect. 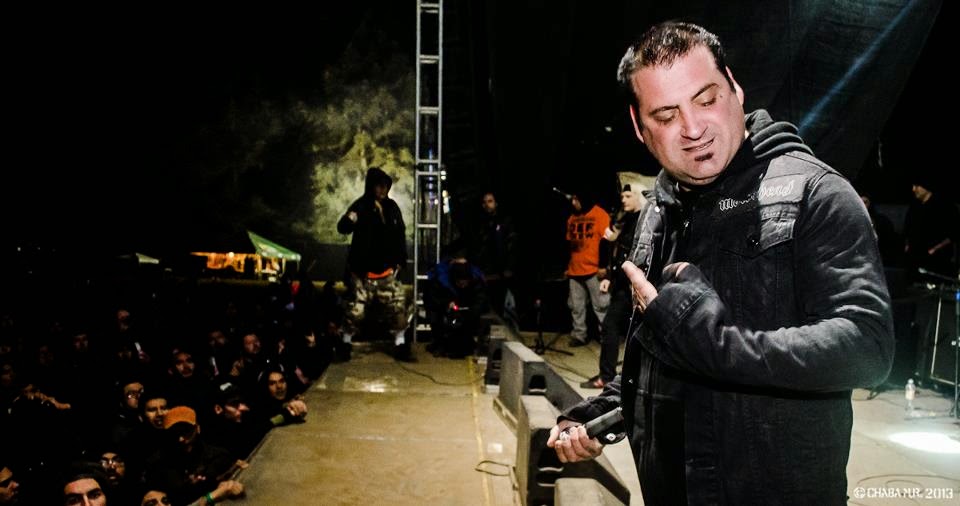 Simply stated, everything about these 8 songs rips. Ten minutes of bliss.

I also think these are some of the best tracks the band has ever put together.