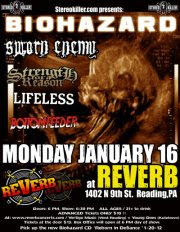 As Sir Edward George Earle Bulwer-Lytton would say, "It was a dark and stormy night..." The perfect setting for my first show of 2012. The sleet and freezing rain that was in the forecast was not going to keep me away from my first show at the Reading club, Reverb. I found out about the club from someone I met at the Murder Junkies show at Jimmy's Place in Allentown. I believe Reverb is run by Chris from Mushmouth and Frank Phobia. Nice to see a venue of this status run by members of the music scene. Reverb is awesome. Great free parking, an amazing sound system, smartly divided over and under 21 areas, affordable food and drink, clean bathrooms, and bouncers who are cordial, yet act fast and decisive to squash what needs squashing, while letting the pit action work out its own issues when it can. Great venue. 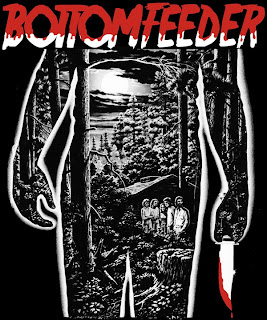 Only saw one song by Bottomfeeder, who are based out of Delaware, but I got to speak to one of the members of the band, after their set, who is from Trenton NJ. We talked briefly about their 7",  awesome t-shirt designs (see one of them above) and City Gardens. Bottomfeeder's one track was good enough for me to search out their metallic hardcore on stereokiller. Real driving and punishing music.

Lifeless from New Jersey, slug it out with their instruments with quick paced powerful head bashing tunes that are offset by completely down shifted tempos. They create some scary sounds. I really started to notice how under tattooed I was at this show! Especially on the neck, hands and face! I gotta get with the program! 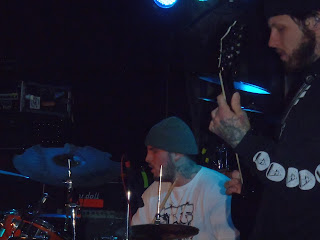 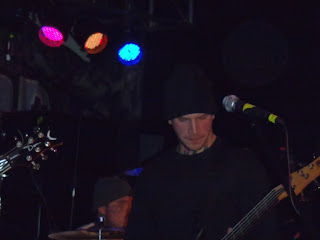 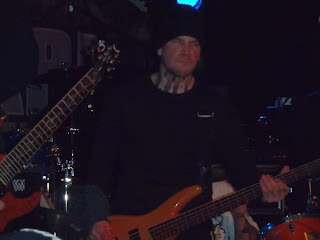 I had never heard of Lifeless before this show, but they have an LP out on Harvcore, which if it is as good as they were live, I will have to obtain.

Strength For A Reason killed. They seemed to have the largest and most energetic fan-base judging by the pit activity. Lots of karate dancers for most of the night (for all the bands), even though just about every band tried to coerce the crowd to start an old school circle pit. 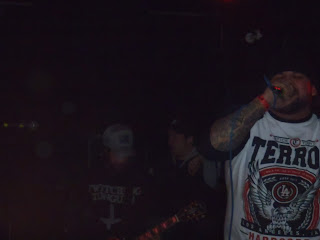 Strength For A Reason 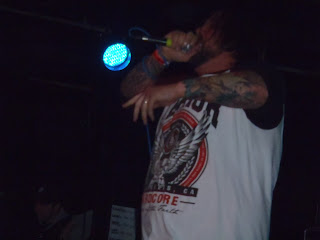 Strength For A Reason

I was looking forward to seeing Sworn Enemy. Their high energy required that they play their guitars wirelessly. Had they actually had cords plugged in they would have ended up in one big knot at the center of the stage by the end of the first song. Love it when the vocalist channels vintage Raw Power ferocity. 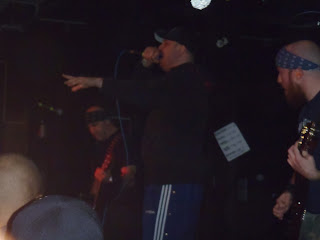 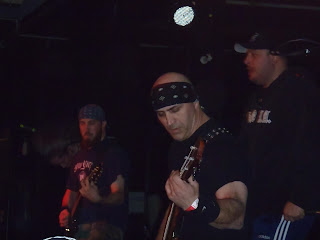 I love Biohazard. I have seen them too many times to count. My old hardcore band Forthright opened for them at Airport Music Hall a couple of decades ago, I wrote an award winning article for the Morning Call from an interview I conducted with Biohazard, interviewed them for my zine FOE back in the day, I saw them with my now deceased friend Digger on many occasions and I believe I saw them with Sheer Terror in Philly. Lots of great memories. This would be my first Biohazard memory without Evan Seinfeld. I am very much looking forward to their new album "Reborn in Defiance", which comes out January 20, 2012 and will be available for free at RevolverMag upon its release. Evan recorded for the album but is not a part of this touring lineup. For more on what Evan is up to, check out this interview in Inked. I had no idea he was divorced and now with Little Lupe!

No worries, if you close your eyes, you'd think Evan was singing and playing with the band! They played a variety of old and new tracks. The crowd, having not heard the new songs listened with judging ears. By the time Biohazard got to the old classic "Punishment" (one of the best songs of all-time, by any band), it seemed like everyone was on board and ready for the next chapter of Biohazard. 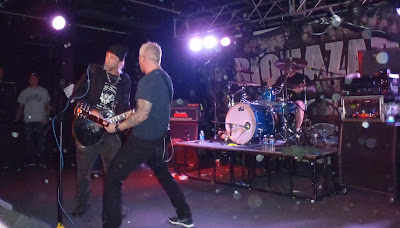 Thank you to all the bands that played the show. Thanks to the fantastic people at Reverb. I look forward to more visits to Reading PA!

Biohazard have released the following statement explaining why Reborn in Defiance will not be given away as a free download today, as they had previously announced.
“We regret to inform you all that due to circumstances beyond our control, we will not be able to offer our new record Reborn in Defiance in the US at this time.  We love all of you who have continued to support us through the years and can’t wait to share with you a record that we are extremely proud of. Thank you so much for your understanding and patience and a special thanks to our partners Revolver, Repudo and Google for their hard work setting this up. All of our touring plans are still solidified and we are excited to see you all out on the road!”
Reborn in Defiance is still available for purchase in the rest of the world outside North America via Nuclear Blast starting today.
Posted by Frank FOE at 7:18 PM