MUSIC FIX OF THE DAY: Devo "Freedom of Choice" 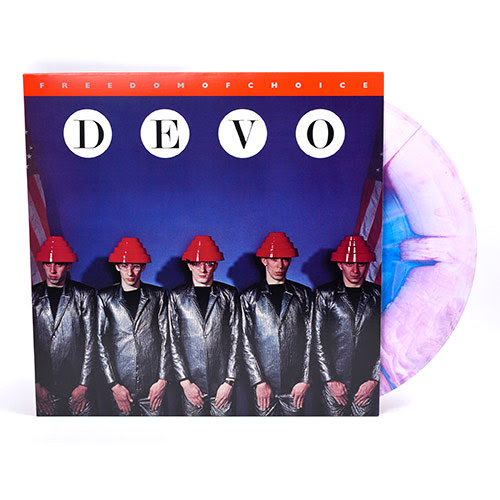 I was 13 years old in May of 1980. I listened to this album every single day before school. Never missed a day. I guess that would have been 8th grade. Pretty sure "Freedom of Choice" made sure that I remained alive through that year. In 1982 the record that kept me alive was Angry Samoans "Back From Samoa". I listened to that record every day before school that year.

I was over the top into this LP. I wore the DEVO pins to school every day on my jacket. I remember getting one of those iron-on DEVO shirts at the mall at a kiosk that would press it on to the shirt while you waited. My peers in school were not fans. Mostly into "Maiden" if I recall correctly. I do remember one of the "Maiden" kids telling me how much he loved the song "Snowball", but that was in confidence. He didn't want anyone other than me to know he too loved DEVO.

Every song on "Freedom of Choice" is perfect.

"Freedom of Choice" is my most listened to album thus far in my life. I'm guessing of course. I didn't really keep track, although some of my close friends probably think I am lying and actually know how many times I've listened to every album. Agnostic Front "Victim In Pain", a couple of Discharge and Slayer albums are probably running close, but I'd say Devo's "Freedom of Choice" is the most listened to record I've ever owned. It is one of the handful of records I've actually played so many times that the LP did wear out. I didn't really have a good turntable at 13 in 1980, so I'm sure that had something to do with it.

Rhino marked the 35th anniversary of this landmark album with a reissue on red white and blue splatter vinyl. This is part of Rhino's "Start Your Ear Off Right” campaign, which included 16 other titles.


I still listen to this LP. I still love this record (and many other DEVO records). I think anyone who picks this up will love it  and quickly learn that DEVO should not be known as a one hit wonder for "Whip It". That some people think this is ludicrous.

I obviously knew this record was coming out in January. I didn't buy it. I wasn't really the target audience. The target was more the new vinyl enthusiast craze rather than the guy who already has two copies of this record in his collection. I see it is listed on Amazon for $30-36 range. The reason why I picked it up was, Double Decker records in Allentown PA was running a 50% off sale on some titles. So yeah, I got this record for like $10. Thank you Double Decker. Thank you Rhino. Thank you DEVO for saving my life.