If you love heavy, brutal death type metal that has a groove, I suspect you already love Black Dahlia Murder too.

When I love a band, I obtain their material in the preferred format, VINYL. Black Dahlia Murder are of that status for me. So you know, if you are reading this you should get the damn record. Comes with a sweet giant poster, lyrics and red vinyl (other varieties available). This is a picture of my record on my floor. F*c&ing love this record!

This is the seventh LP I have by Black Dahlia Murder. I should have 8. I am looking for a copy of the 2007 release "Nocturnal" on vinyl if you have a copy for sale... Sell it to me. I only have it on the substandard format of CD. Seriously. It is a hole in my record collection that is screaming to be filled. Why the hell I don't have it is suspect. Did someone swipe it? Did I leave it at the radio station? Help this vinyl junkie!

I suggest you obtain and listen to Black Dahlia Murder as well. Check out this video for the title track:

The thing that has had me since day one with Black Dahlia Murder is their fun. They just seem to be having a blast. Which means live they are such a great metal release. Plus Black Dahlia Murder knows how to throw together a ripper. Hit play on any of the tracks above and witness the perfect blend of chaos, precision and intensity. Plus I am a sucker for alternating styles of vocals, which they use a lot.

When my son was a toddler certain music I played for him generated instant positive responses. Johnny Cash, Ray Charles, any bluegrass and BLACK DAHLIA MURDER. I kid you not. None of the other metal interested him. I dropped the needle on Black Dahlia Murder and he stopped doing what he was doing and was fixed on the sound. Moving to the ultra fast beat. Now I look at all of those examples and I understand what all those musicians and genres have in common. Fantastic that my son picked up on the common thread that most adults are too manipulated and jaded to comprehend.

Of course at age 13 my son shuts down on all metal. Hates it. Why? He hates loud. Black Dahlia Murder is LOUD even at low volumes. But the louder the better. Full release gives increased results. 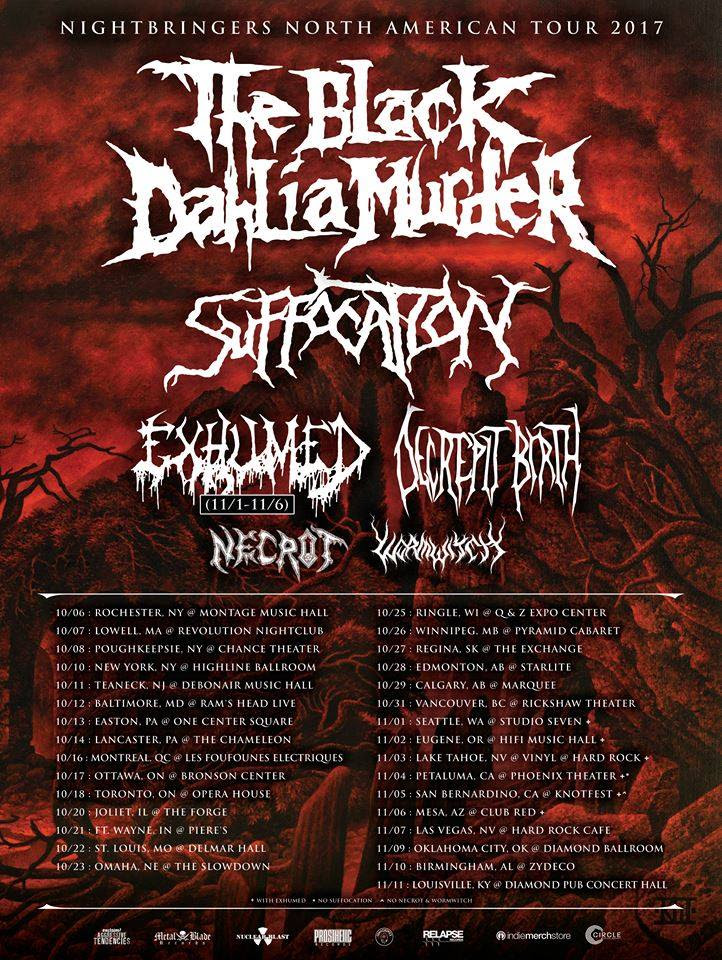 Black Dahlia Murder is playing an insane tour and it is stopping within a 40 minute drive of my house! Exhumed doesn't start the tour until 11/1 - they kill as well and their new lp "Death Revenege" is a must own. Suffocation is obviously also huge. If you don't know Necrot, you'll want to make sure you don't miss them.