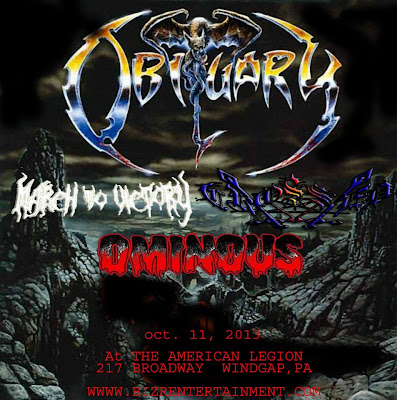 I've been a fan of death metal and Obituary since... well, a long time. Some of my punk rock friends don't quite understand, which probably stands as some sort of testament to my love of this music. Seems kind of silly that I have never gotten the chance to witness Obituary live... but thanks to Skip and Obituary, I WILL finally get to see Obituary in 2013 in Wind Gap!

Drummer Donald Tardy: "We have been busting our asses in the studio, having a blast and writing new material. Twelve songs are done and ready to be recorded but we want a monster album for our fans so we are working on a few more to make this record huge! We will continue writing until October when we will take a break from the studio and new music and go destroy the Trois-Rivieres Metalfest with Hatebreed and crush the US."

The as-yet-untitled full-length will be recorded with the KickStarter funding help of their legion of dedicated fans around the globe. The campaign, rooted in an honest desire to produce the next record on their own terms, is in its final week. http://www.kickstarter.com/projects/unation/help-fund-a-new-obituary-album

"We've been creating death metal since 1984," the band comments. "It's who we are...it's in our blood.  If there's one thing that we've learned touring all these years, it's that OBITUARY fans are among the most loyal and supportive motherf*$%ers in the world! We've been trying to find better ways to engage with and give back to our fans. Over the past couple of years, we've streamed concerts live from around the globe, given away tons of merch packages and dozens of all-access backstage passes.It's inspiring to see and share in your excitement about OBITUARY, and the inspiration that provides keeps us going. This is about putting our trust, our music, our career, and our new album in fans' hands! We want to make music for the people who still come out to shows, still sport our gear, and still have a Slowly We Rot cassette in their car." 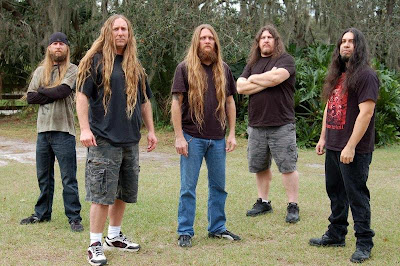